Book Review: Why Does E=mc²? (And Why Should We Care?)

“A spirited, easy-to-understand collaboration… ...Why Does E=MC2? promises to be the most exciting and accessible explanation of the theory of relativity in recent years.”  This lofty promise graces the last paragraph of the dust jacket of this book.

After reading (grinding?) this book, I do have a deeper understanding of Einstein's general and special theory of relativity, but it was neither easy-to-understand or fun—but the authors are having fun...

Imagine you're reasonably fit, and you have always wanted to go backpacking. You think a couple guides on your first solo trip would be wise. You hire Brian Cox and Jeff Forshaw, two lean twenty-somethings that have backpacked this particular trail 781 times, and have even summited Everest. They bounce with energy and are always excited. Now imagine Jeff pointing to a craggy peak away a piece called, “Understanding Energy”. It doesn't look too far, your legs are feeling sound, “OK, lets roll!” you say.  But instead of a direct line, Jeff and Brian take you on a long circuitous route. Sometimes Brian offers his arm across a puddle, “No thanks, I'm good."  Then later bounds like a mountain goat through perilous terrain, all the while saying, “Just follow me, this is so easy!” Three or so re-readings later, you feel like you can pick your way through the terrain. You're a sweating mess and Jeff and Brian are running in place to keep their heart rates up.

By the end of the book, you've visualized each of them finding a faulty handhold and plunging to their demise… “Wasn't so simple, was it Bri-an.”

The bottom line: if you have an understanding of physics, Newtonian, Einsteinian, and are familiar with the works of Maxwell and Faraday—and you're not easily annoyed, then this book promises a deeper understanding of the fabric of the universe. You'll understand that mass is interchangeable with energy, and that working with only those two can never bring you any closer than an approximation (Newtonian Physics); for something even closer, we must factor in the speed of light. (Physicists have yet to uncover the Grand Unified Theory.)  You will come to understand spacetime, that it is a pliable thing dented and creased by mass and acceleration and you may even be able visualize it as the fourth dimension; this was first for me. You will also play with star fusion, light, quantum physics, visit CERN in Geneva, and more. This book doesn't require intelligence so much as it requires mental flexibility, focus, and imagination… and the ability to not strangle the authors in the process.
Posted by Amy at 4:32 PM 4 comments:

It was the tail end of a meeting for a group I attend and Berzo was getting squirrelly. There's childcare available, but being trapped in a room with rambunctious, space-bubble-invading, three-year-olds doesn't float, no matter how cool the toys are. So Berzo sticks with me and after two hours of coloring and wandering around the room she's usually pretty ready to go. Eager to help, my friend Kathy reached into her purse and pulled out a lovely little rock with a blue heart affixed to it. She told Berzo it was a “Love Rock” and that she wanted her to have it. Berzo was still and quiet, a sure indication that she was touched. Kathy told her she could make one too. Berzo said that she didn't know how. So Kathy told her, “You cut a heart out of fabric and use Mod-Podge to stick it to the rock and make it shiny.” Berzo repeated that she didn't know how to make a Love Rock. Kathy tried again. Berzo said again that she didn't know how to make a Love Rock, with the patience to rival Job she explained it yet again, and then I took Berzo aside and told her we'd make some together. Kathy then filled me in on the backstory of Love Rocks.

Berzo held her rock in her hand all the way home, repeating her experience over and over, soaking it in. Then she gave her Love Rock to her Papa as soon as he came home, and she told him the whole story.

Love Rocks. It sure does.


Backstory:
In the fall of 2013 two young Forest Grove girls, Anna and Abigail, were hit by a car and killed while playing in a pile of leaves and our hearts collectively broke. It was surreal. Really? They're gone? Just like that? Just like that.

Instead of letting the girls' lives be defined by their tragic end, their parents decided to honor the love their daughters brought into their lives by starting the Love Rocks movement. Love Rocks can be found in parks, libraries, coffee shops and more.  They litter the town of Forest Grove, but are spreading all over.

Boots was also moved by the idea of spreading love this way we decided to make use of a sick-day to make a few of our own. We drove to Jo-Anne fabrics and the girls each picked out a fabric remnant they liked. While I hunted for Mod Podge, they popped in and out of the kid aisles. I made several speed laps around this store designed by Entropy herself, until I finally zeroed in on the elusive Mod Podge. Randomly choosing one of the thirty varieties, we headed to the checkout.

Mod Podge looks suspiciously like the rubber cement of the 80's, so I thought working outside would be wise. It was. Our fold-up card table is now shellacked in the stuff.

The girls hunted for five nice rocks each while I cut heart shapes from their fabric. I poured Mod Podge into two paper bowls and handed them paint brushes. They were off! They painted the fabric hearts onto the rocks with fervor and randomly shouted, “I need more Mod Podge!” and “Mama, I need another heart!” Then they'd dash out to get more rocks and wash them. The heat bored into the back of my head as we completed our labor of love. Boots looked up at me red-faced and said, “Mama I think I'm done. I'm getting too hot.” WHEW!

We then trimmed the paper “Love Rocks / FB” tags and painted those on the reverse side. We laid our rocks out to dry and retreated inside.

I was expecting to produce about ten total, but I think we ended up with about forty. Still slightly tacky, the girls distributed them to the door stoop of friends and neighbors. A pocket full of rocks accompany most of our trips to the park.

The best part has been the quizzical looks that people give us when Berzo or Boots is placing them and the delight they show when they hearing the story. On our last day of my group, Berzo brought five and handed them out randomly to the other members. They all came up to me to express their gratitude. My toddler gave them rocks and their hearts were touched. How awesome is that? One woman was particularly affected, and we chatted at length. As she turned the rock in her hands and caressed the heart, I could see how deep the small gesture set. She runs a child care and was wondering out loud about getting her little charges in on the love sharing.

If you see a Love Rock, upload a picture to their FB page, then take it and drop it somewhere else. Or if it makes you happy, keep it. Make a few to share and remember that it all started to honor two little angels called home to heaven early. If you're a runner or walker, consider signing-up for the Love Rock Run, all the proceeds of which are going to the construction of a memorial park for Anna and Abigail. The run will take place in Forest Grove on June 27th. 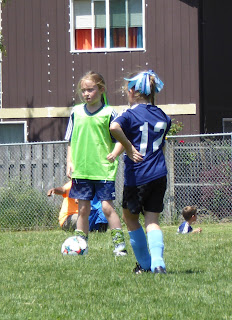 Boots just played her final game of her first soccer season over the weekend. It was something of a wish fulfilled for me, as I have not-so-patiently waited seven years for the privilege of sitting on the grass cheering my kid and her team to victory. Not that victory is what happened, they don't keep score, but if they did I'm pretty sure the other team won. Who cares? It was intensely fun watching her play. Even Berzo enjoyed herself, tossing out a, “Go sister!” now and again.

Charley and I love sports, but neither of us knows soccer. I think that's part of the appeal for Boots. We may have ruined baseball for her, it's difficult watching your parents who have a lot of experience with baseball play around and have fun, while you don't have the first clue as to what's going on. Whereas with soccer, she's way ahead of our curve. And bonus, she doesn't have us giving her complicated advice that's not appropriate to her playing level, she just has her parents watching, cheering, and having fun.

I'm not giving up on baseball though. One day, I will watch my daughter (at least one of them) play in a baseball game, even if it costs me a bribe.

It has been fun for Charley too. This is the first time Boots has had an activity that interests him and that that he's available to involved in. He her took her shopping for her gear, drove her to practices, bought her goals for playing at home, played with her at home, and pretty much managed her season.

Being the family with younger kids in the neighborhood, we have heard stories about competitive coaches that yell at the kids, out-of-control parents—the works. We were spared all of these problems. The coach is the nicest guy; he rotates the girls frequently, is always giving guidance, and notices what they do right. The thing he says the most was some variation of, “Are you having fun out there?” The parents alternate chatting with each other, chasing roaming toddlers, and cheering for the kids. Nobody gets mad. Nobody shouts.

The kids are great too.  They play their hearts out, but I hear them saying, “Oops sorry!” when they bump into a member of the other team. Although the game is rife with bloopers, e.g. kids running up to the ball to put on a big kick and missing the whole thing,  nobody jeers, they just run back and try again. It's exactly as young kid's sports should be, building skills, gaining experience, learning to take turns, realizing making mistakes is part of the process, setting up team members by passing and playing defense, and cheering each other on. 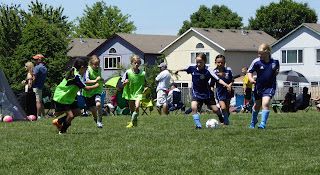 Until Boots expressed an interest in soccer, I had all but given up on her playing a team sport. She just didn't seem to have the drive for it, but she was just waiting to be ready and get to start on her own terms. I couldn't be more proud of her, she listens and responds to the coach's directions, catches on quickly to new skills (rather than obsessing about whether or not she can do it), she rolls with her mistakes and gets in the thick of things—all of which are brand new for this kid. She has done well and learned much.

What a fun season.

What fun it is to get a front seat to watching a person grow.