Moo and Boots: Harbingers of Spring 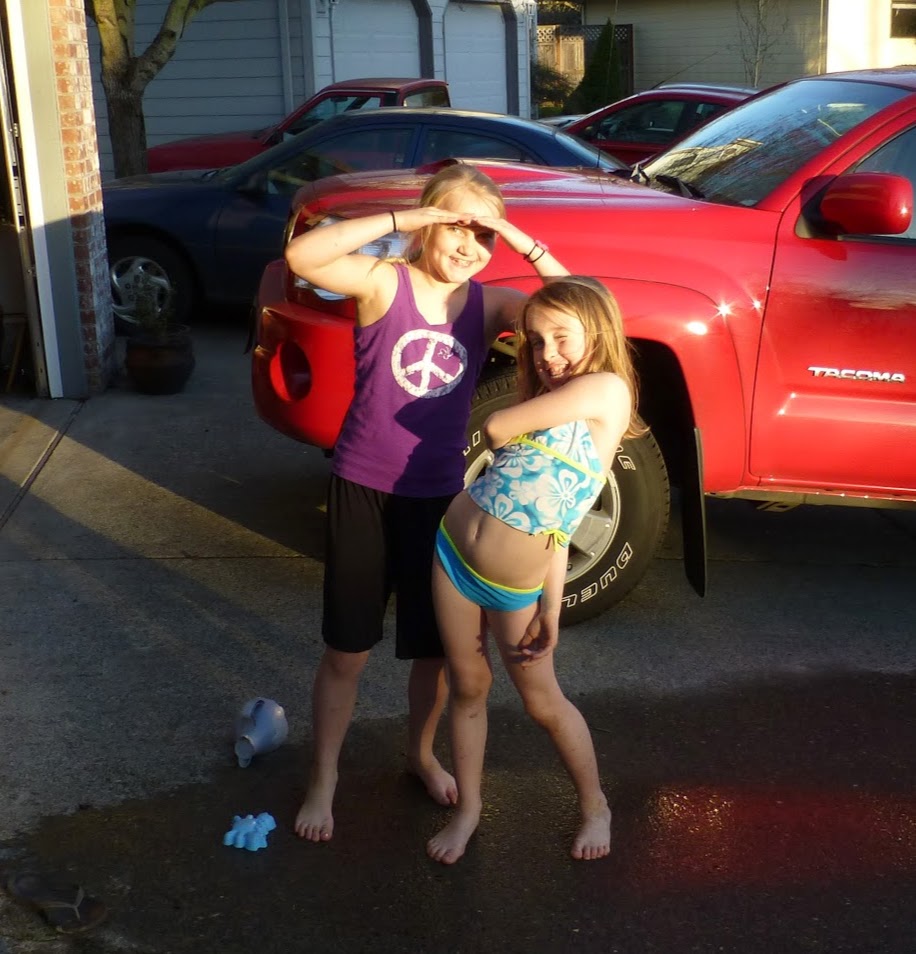 There are many universal signs of spring, daffodils, birds singing, everyone updating their Facebook profile pictures… But the past three years or so, spring’s unofficial start is when Boots and her friend Moo don swimsuits, and I hear the familiar whoossssh of water running at the spigot near our front door.


It's a balmy 57 degrees on a Tuesday and the girls are in heaven, soaking up every drop of sunshine and warmth. Boots flops into the house, eyes bright, wearing a huge grin, “Mama, can me and Moo have a water fight?!?!”

My mind coughs up, Of course not. It’s not even sixty degrees outside, it’s 6:20 and time to come in and get ready for night time. No way. Clean up that mess outside and get your butt in here.

But luckily my mouth and my mind are wired to different neural networks. I pause and think. Boots is starting to get impatient, “Can we??”

Reflex squelched, logic centers of my brain start churning, Why not? What could it possibly hurt? She doesn’t go to bed until 9 p.m. as long as she comes in before Berzo's bedtime so she doesn't make a racket when Berzo's trying to fall asleep, it should be fine. She's going to get cold, but so what? I've read time and again that kids need the freedom to experiment (when it's not life and death) and feel the consequences of their choices… They actually learn more that way…

Engaging language centers of my brain, “Yes, go ahead. Stay outside until you're ready to come in for the night. No running in and out of the house all sopping wet.”

And so it was. Charley thought I was crazy, but I'm used to that.

*Warning Eminent Digression*
You ignored my warning—I knew there was a reason I liked you. Anyway, I have a parental weakness for two things, buying my kids books, and spending time outside. I always refuse impulsive toy and junk food requests, but it is really hard for me to refuse them books. And spending time outside is one of the healthiest things for a child to do. I do set boundaries, of course, but unlike other arenas, I give in occasionally. When I do, I like to let them think they win. It's kind of like saying giving in to broccoli, “I don't know… You had broccoli yesterday and we're are at our budget already… Oh OK, what the heck, you've been helping me out a lot lately. Go ahead and get a big green head.” When really inside I'm saying, “Yahoo!”
*End of Digression*

The water battle raged, and my ears were tickled with peals laughter from two little girls I love to pieces. They lasted for about forty-five minutes until Boots, all goose bumps and chattering teeth, asked if she could come in. I asked the girls to clean up the toys and such, which they did, dripping, shivering, and grinning all over.

I left Berzo's bath water in the tub and let Boots know it was waiting for her. She dove right in and an “ahhhhhh” escaped her. I turned on the hot water to warm it up a bit and she melted right into the tub.

Today the sun is once again shining down on us. The birds are singing, blossoms are sprouting all over the trees, and the daffodils have finally opened up their brilliant yellow heads. It's a good thing Moo and Boots let them all know it was time to come out and play.

Was this a great book? No. Was it even a good book? Not really. Not unless you find riding 13,978 miles around our country with a paunchy, sarcastic, middle aged, cheap-ass, wuss of a man across the United States. At least that how he describes himself… (Well, I added the wuss part, cause it's true.) Then I thought about it, he could have shined it all up with poetic lilts to describe the unique beauty inherent into each little town and turned this into a fake tribute to America's variety and beauty. But he didn't. He was honest, (refreshing!) humorous, and painted the picture as he saw it, allowing us to see the country and himself through his eyes. I can respect that.

Bill Bryson grew up in Des Moines, Iowa. As soon as he reached adulthood he fled his dull, idyllic, mid-west life and spent the next decade or so in the UK. Now 36 years old, (1987) with a wife and kids, he returns to home to a country that is barely recognizable to him. His father, the architect of the arduous road trips of his youth has passed, baseball teams were in the wrong cities, old city squares were supplanted by strip malls… This trip was journey to reconcile his past with his present, his father's presence in himself, and rediscover the home he had left behind, and to some degree lost. Upon his return to Iowa, a waitress asks him, “You're not from around here, are ya?"

All of those inferences aside, I would have loved for him to just once to go beyond the window facade that is a small town's center, make a connection with a local, and uncover the magic that lives there. I'm a small town kid, and we had a hate/love relationship with tourists. They infused enough money into our business for them to thrive during the summer and survive the winter, but we didn't want them hanging around and mucking the place up. Only a select few were invited in to see the magic, and more often than not, they'd stay… If I was a waitress waiting on the Bill Bryson of this book, I would have handed him his check and sent him on his way too…
Posted by Amy at 4:51 PM No comments:

Laura Ingalls Wilder ©1953
I read several reviews for this book and it was critiqued pretty harshly. People said the writing was poor and not at all like the rest of the idyllic Little House series. I, however, liked it—a lot.

First of all they're right, it is not a literary work of art. It was actually published from four notebooks, a handwritten rough draft, found after Laura’s death. But, what resonated with me was a feeling of authenticity. The other book I've read, Little House in the Big Woods, was wonderful, but felt censored—highly polished? For example, she’s afraid of being spanked by her Pa, but instead he curls her up in his lap for a moral story. Leaving me feeling that this man never, ever, lost his temper… Not even when his daughters disobey him, not once, but twice. But, if she was afraid of being spanked then wouldn't she have to have felt his belt before?

Laura and Almanzo are married early on in the story. Laura is nineteen and Almanzo twenty-nine. That's what attracted me to this story, I was twenty when I was married and part of me wanted to revisit those newlywed years and contrast them with hers. The comparisons in our daily lives are that there aren't any. I lived in a cozy little apartment in the suburbs and she lived in a government homestead in the Dakotas. However, Laura and Almanzo are immediately recognizable. Laura is still a woman/child, (like I was) who spends a snowy day playing and sledding, (like I did). Almanzo is an earnest, hard working man that doted on his young wife. (Like mine did.)

Laura has doubts (what? Laura has doubts!?!) about Manly's choice to earn a living by farming a homestead. She doesn't want to spend her life poor and broken from work. Infinitely optimistic, Manly convinces her to try it for three years. Each year their labor is devastated by forces of nature. Their wheat is filling out beautifully, then heat swoops in and dries it out. All that hard work was for naught. Plowing, seeding, tending… Done. Gone. The livestock, the prairie grasses (sold as hay) and Almanzo's strong back, provides just enough to get by and they try again the next year. Then Rose arrives.

Authenticity aside, I was a little relieved that Rose didn't arrive by stork. Although when Laura's labor began, the doctor arrived and then she fell asleep and the baby was here. Woah. I think modern medicine has taken a step backwards. Or she did a little creative storytelling to protect her modesty. I can understand that in a pioneer era woman.

The next three years are rife with disasters and oddities that can only be real, fire, losing a child, fever, Almanzo's stroke, their friendly neighbor who offers to trade baby Rose for a horse. Through it all, Laura never despairs and Almanzo never loses faith. After hail flattened $3000 in ripe wheat, money that would render them debt free with some to spare, Almanzo cheerily suggests they use the hailstones to make ice cream. Laura and I decline, and wonder if he’s a little touched in the head..

I understand why Laura, herself, never published this book. I also understand why she had to write it. Sometimes a writer is not in charge of what she writes. Sometimes a story becomes a nag, crowding out other ideas demanding to be written. So she did. However, she chose not to publish her doubts, trials and pain.

I am glad she wrote it. I’m glad it was eventually published. I'm in awe of their perseverance and hope. I'm in awe of their evident love for each other. I’m touched by Laura’s vulnerability and support of her husband despite her reservations. Perhaps their struggles bound them as a couple. In modern “me” times, it seems to tear couples apart.