I'm learning to fly, but I ain’t got wings. Coming down, is the hardest thing.
So true, Tom Petty. So. True.

I watched a video entitled, “People are Awesome”.

If you didn't watch it, one clip after another showed men and women doing incredible acts of athleticism and grace. A woman leaps backwards from a cliff, twists, tumbles, into a dive into the waiting water below. A man does a series of bouncing flips on a slackline. A snowboarder glides up a tree gives it a push, flips and continues on his way down the hill. Awesome, indeed.

I’ve never attempted anything shown here. Not even close.

On the flip-side there are also thousands of fail videos out there. Epic crash and burns. I’m sure all these people have fallen thousands of times with a few epic crash and burns among them. The slackline guy was over water, and though the video didn’t show a fall—his hair was wet. However, I’d bet serious injuries for them are rare. So rare, that it never deterred them from pushing their boundaries.

Falling/failing was a non-issue. Part of the process.

I developed a fear of falling as a kid. I never learned to cartwheel, handstand, walk on my hands, flip from the monkey bars, and as I grew up my fear of falling kept me from learning to snowboard.

I had taken some bad falls you see, I over-rotated a few times and hurt my lower back with the resulting solid thump when I fell. I’ve fallen and hurt my tailbone countless times.  I've knocked the wind out of myself. I’ve sprained my wrists and ankles. I’ve been knocked backwards and saw stars. I’ve caught my snowboard edge many times with bone rattling spills, sometimes on ice.

I love team sports and played them all, regardless. Although I got good at not falling, when I did I was usually sidelined for weeks with a sprain. I’d chafe while sitting on the bench watching someone else play the position I’d worked so hard to earn. The worst was when my absence caused a position shuffling that ruined the team’s chemistry and caused us to lose. I went to a small school and every player mattered.  I played a lot of ball games with taped up joints. “Nah, coach, I’m fine. Ankle, wrist, knee, leg, feels fine—see? Put me in.”

Then I graduated school. Moved. Started a full time job. Got married. Went to college. Started a career. Did that for ten years. Became a mom.  Competitive sports gave way to running, indoor rock climbing, hiking, biking, and working out. Falling was pretty much a non-issue at this point in my life.

Then at 38, I started learning Martial Arts. Taking a fall is an integral part of the deal and at first it was my least favorite aspect at class. But it was unavoidable. Throwing and being thrown is a fundamental aspect of training. I throw my partner, then it's her turn to toss me around.

Seeing our (OK—my) terrible falling skills, our instructor stopped class and gave us a talk about proper falling technique. He said that of all the martial arts skills he’s learned over the years, learning to fall properly was the biggest contributor to his personal safety. He had many stories of devastating falls that only resulted in a few scrapes. He had stories about his sons, who have grown up with martial arts, avoiding serious injuries as little tykes because of their falling skills.

He then showed us several safe falling techniques and we spent the remainder of class falling. It was awful...at first. Then easier. By the end of class it was...well...fun. I, tall-gangly-Amy, was having fun falling. From then on, whenever we were going spend the class working throws, I would warm up with a dozen or so falls to remind myself of the finer points: tuck chin, round back, arms in, aim for one of my squishy butt cheeks, breathe out, break fall if needed. Then we learned rolls. Not somersaults...rolls.

Now...I can cartwheel. Now...I can handstand (sorta—my legs kind of flail) but if I go over I tuck my head and roll down a rounded spine. No more bashing my sacrum on the ground.  It ain't pretty, but I can do it!

I was on a run recently when I tripped over nothing and fell. As I was going down—face first, I remembered not to straight-arm it, and deflected it into a sideways roll. I had a few minor scrapes but no real injuries. What could have been a bashed knee and two sprained wrists was nothing. I think falling is the coolest thing I’ve learned so far...that and the butterfly kick. Butterfly kicks are pretty cool too.

Then my mind, as it is wont to do, slips to metaphors. Falling and failing is the same thing.

I was trying to do something and I fell/failed.  Sometimes it’s just a flub, like when I fell running or when I misspell an easy word. But often fails/falls happen when we’re stretching ourselves (flailing) and trying something new.

Twenty some years ago, a-hem!, I strapped on my shiny new rollerblades and went skating with my cute boyfriend and his sister at the Memorial Coliseum. I was cruising along, then suddenly I was spinning around on the floor. Lina said, “Hurry, get up, Charley’s coming around the bend.”

I scrambled to my feet, wobbled, and pushed off grateful to avoid the embarrassing scene. I’ve been saved from other embarrassing mistakes by not speaking up in class, by not finishing that project, by not sending my work out to a publisher, by not trying for that position I really wanted because I knew I wouldn't be able to take the fall—it would hurt too much.

“What if I fail?” So embarrassing.

But why are mistakes so embarrassing? So what? It is really that bad for the world to see I’m not perfect?

Last school year, a little girl I know (and adore) in Berzo's First Grade class was brought to tears because she made a mistake on the book she was making, she started on it upside down so it opened the wrong way, and we didn’t have any extra for her to start over. Another kiddo in a different Centers group, cried when she made a mistake on her construction paper paper project she couldn’t erase. She nearly burned up the entire session fretting over her error before she decided to cut a scrap of paper to cover her mistake before she could continue her work. I would have loved to see these kids creatively incorporate their mistakes into their project and go with it, or just shrug it off and move on. But upon realizing their mistakes they were horrified, embarrassed, and brought to a standstill.

In my time helping out in Berzo's classroom, I’ve repeated this experience with virtually every kid. From backward letter Bs, to misspelled words, to circling the wrong picture... Upon realizing their mistake they'd call me over, desperate for my help.  I’d tell them that’s it's OK, just line it out and keep going. And that's why they’re in First Grade, to learn these things and make mistakes.  If they already knew everything they would be in the Second Grade then there would be a whole new set of mistakes to make. I told them that I make mistakes. All. The. Time.

They’d look at me like, “Really? Well, I don’t. Help me fix it before someone else sees!”

They are FIRST GRADERS, so literally everything in academia is new, and yet they expect perfection from themselves and they shut down when they fall short.

My own kids are this way too. Innocent mistakes and missteps own them and shut them down. They live in constant fear of messing up. They are even embarrassed in front of us. Charley hears, “Don’t tell Mama.” I hear, “Don’t tell Papa.” Us! We have changed poopy diapers that blew up their backs and out their collars countless times, and they act like we don’t know they aren’t perfect. 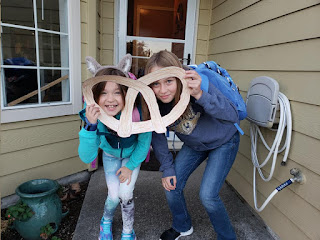 Boots said, “I’m just going to be the quiet little mouse that never speaks up,” about her 6th Grade year.

I said, “Why would you do that? I think the world needs to hear what you have to say.” This kid is a deep thinker and has a lot to contribute.

I said, “So? If you ask a ‘dumb’ question, you know you just asked it for the at least half of the class that had the same question, right?”

Berzo won’t even let me put water in her lunch bag because one time last year it leaked and got her backpack and pants wet. She was horrified. It. Was. Just. Water. I would have loved for her to have said, “Haha! It looks like I peed my pants! So funny! Can you pass me a paper towel, please?” Nope, she’d rather choke her food down dry.

I have a feeling the people who reach their personal goals are experts at failing.

I have a feeling that every person in that People are Awesome video is an expert at falling.

I taught my girls to walk, but did I teach them to fall? I’m pretty sure, my “Uh-Ohs!” when they took a spill and a scoop-and-cuddle delivered the unintended message that falls are bad and scary  and should be avoided. They are learning to succeed in school, but what about persevering through failures? Their terror at making mistakes tells me, no, they’re not.

BUT there’s still time. I can show them fails/falls are not to be avoided but to be sought out and practiced, so that they don’t become a barrier to who and what they want to be.

Get used to being wrong, and learn to admit to it, and keep moving forward.

Get used to losing, and learn handle it with grace.

Get used to being laughed at, and laugh too. This was super-hard for me. But I’m pretty good at it now.

Get used to falling down, and learn to do it well.

Get used to being rejected, and learn to shrug it off.

Get used to falling short, and evaluate the scenario to figure out why and fix it.

Makes mistakes, and learn to own them, so they don’t own you.

Learn to fall, so you can learn to fly.