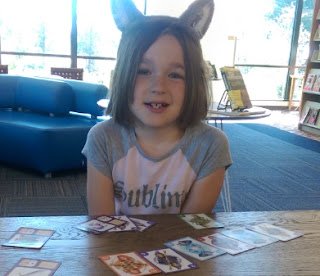 The day dawned bright and full of promise. Our plan was to ride our bikes to the library. Boots had an appointment with a sixth-grade teacher from her school. Berzo and I were going to practice math by playing a rousing game of Dragon Wood.

The ride was lovely. The game was the most fun I’d ever had playing with Berzo. She was focused on her game strategy and did all her own math. She captured both dragons, but I ended up with more overall points. She took the loss in stride. It was great fun.


At the end of the hour we checked out a few books and collected a happy Boots. Then the girls got their obligatory donut holes and we headed back outside to our bikes.

The sidewalk down from the bike rack has a gentle curve on a gentle slope. Near the base there is a sharp turn connecting the sidewalk into a wheelchair ramp from the library. Berzo got going to the corner, panicked and didn’t turn. She ran smack into the railing jolting her whole body forward. She didn’t fall but let go of her bike and sat down. Then started crying out in pain, “Owe! Owe! Owwwwee!”

Oh crap, that’s the hurt cry. The real one.

I propped up my bike on the railing and ran over to her. She’s was flat on the sidewalk writhing in pain.

“What about your pelvis?”

I remember the pain of slamming into my handlebar joint well.

“No, just my wrist and my arm! It’s broken! I need an ambulance!”

She is holding her right wrist with her left hand. Her right-hand looks limp and useless.

I rooted through my bag.
Nothing.

Then I noticed my para-cord water bottle holder. Perfect!

I popped the melt joints, and, with no small effort, unraveled the weave. It’s nice and long. I made a loop around the back of her neck and under her wrist being as gentle as humanly possible. Then I wrapped it through her fingers (at the Spock V juncture) and around her chest, nestling her hand into her chest at a slight upward angle. I made a few more wraps and knots and Berzo says it feels good. She stood up—reluctantly, and it’s fairly secured. Boot and I helped her onto her bicycle. I held on to her bike to balance and push her home.

I told Boots to leave her bike near the path and to push my new one home. (Her’s is an old hand-me-down.)

“Boots, no. Just leave your bike and push mine.”

Berzo and I wait and I make a phone call to her pediatrician’s office. They have an opening with a Nurse Practitioner that Berzo likes at 1:10.

Berzo and I got moving again are getting quite a bit ahead of Boots as she fumbled trying to get both bikes rolling. I kept going. I expected her to come running up any moment with my bike or riding her own bike. Either way would have been fine, but she didn’t.

I kept pushing Berzo. Boots fell out of view.

Isn’t this how things went bad in The Shack? The parent was helping one child and the other one… Oh God. No, she’ll be OK. She’s old enough to handle herself and the path is busy with parents and kids and dog walkers etc. Nobody could get away with nabbing her even IF a weirdo was around.

This I said to myself as Berzo sobbed in my ear as I pushed her on her bike. I pushed faster. I started to trot then slowed to a fast walk again when Berzo got scared of falling again. Sweat soaked into my clothes and ran in my eyes.

I got Berzo home and carried her into the house and placed her on the sofa. I got her a bag of ice and the TV remote. I told her I was going to go get Boots and that I would be back in less than ten minutes. She says, “OK.”

I planted a kiss on her head and dash out the door.

I was grateful that I’m was already dressed in running clothes because it’s too dang hot outside. I took off at a brisk lope. Worry pushed me on faster even though I’m burning up in the sun. As I passed a garage saler for the third time I briefly wonder what he’s thinking...She comes by with two kids on bikes. An hour later she’s pushing one kid on a bike and then five minutes later she barreling down the road on foot...WTH?

As I crested the hill there was a very red-faced little Boonie holding two bikes. She saw me and started to cry.

My worry made me say, “Why didn’t you just do what I asked? I was so worried.”

“I’m sorry, Mama. I just wanted to be strong for you and make you proud of me that I pushed both our bikes. I didn’t want one to get stolen!”

Tears mingled with sweat and ran rivulets down her red cheeks.

“I can replace a bike, but I can’t replace you!”

The last of my angst dissolved in the midst of her pain.  I gave her a big hug and told her how brave she was to try so hard to manage both bikes. I took my bike and noticed my lock was missing. I told her to stay put. I rode at Mach 3 back over the path looking for the lock. I found it in the grass about a quarter of a mile away. Then I barreled back to her.

Boots was not where I left her.

She’s waiting in the shade about 30 yards from where I left her.

We hurried home and parked our bikes and went in to see Berzo. She’s upset—Netflix isn’t working.


I popped in the movie she borrowed from the library and checked the time on my phone.

I listened to the message. Someone scooped our appointment. I called back and talked to the receptionist. They had another opening at 1:50. After some unsuccessful cajoling to keep the 1:10 slot, I took it.

I got her some food and she dialed back into her show.

I rooted through our closet looking for one of their old slings. I find Berzo's from when she was itty-bitty.

I kept rooting and found Boots'.

Perfect. Wow, my kids have hurt themselves a lot… Ug.

I took off the paracord sling and slide on this one.

“Ah, that feels much nicer, Mama. Thanks,” Berzo says.

“You’re welcome, Baby,” I said and gave her a kiss.

I downed a glass of water and it all flowed right out through my pores.  I'm soaked.

I offered Berzo some medicine—that we don’t have—and drove to the store to get some. I also picked up a bagel and cream cheese for Boots for her lunch. I zoomed back home and get food and medicine to my girls.

I managed to cram a little food into my gob too, then it was off to the pediatrician.

The doctor was kind as she asked questions and worked over Berzo's body checking for injuries.

“Oh, you already had a sling?” the doctor asked.

The girls piped up with their stories, “Mama, remember when I fell off my bike and knocked out my tooth! I didn’t hurt my head or my chest, but it right I smashed my mouth right into the sidewalk!”

Boots, “I broke my arm too! I fell off a shelf! Oh, yeah, remember when I crashed my bike so hard it bent the tire?”

The doctor broke in, “Are the knees from the crash too?”

“Uh, knees?" I saw the band-aids on her knees and said, "Oh yeah. Uh, no. That was yesterday. She crashed on her bike going from the road up a driveway.”

The doctor raised her eyebrows.

I wondered if she’s seeing air-quotes around “crashed her bike.” I felt (feel) about two inches tall.

She turned to Berzo, “How long have you been riding your bike?”

I butted in, “She started riding a Strider bike at 2 ½ years old. She’s been on a pedal bike since she was three.”

The doctor worked her way to the hurt arm and Berzo cried out a few times when she found the tender spots. Berzo did all of the maneuvers she asked her to do. The doctor decided that it was likely not to be broken, but thought it’s bad enough that she’d like to see x-rays.

“If it’s not broken, keep her in the sling over the weekend to remind her to be gentle with it and to also remind her to stay off her bike,” she said.

“Then if she’s not using it somewhat by Monday or Tuesday, we might need more x-rays. Sometimes a break won’t show on an x-ray until 5 days or so after the injury,” the doctor said.

Off we went to the imaging center for x-rays. (When did doctors stop doing x-rays? Has it been like a really long time now?)

A short, stressful drive later, I’m ready to expose my little daughter to a significant dose of radiation. I stand behind the safety glass and wonder why they don’t put lead helmets on the kids in there getting all the radiation. She initially says there will only be two “pictures” but end up taking three.

Do we need three? Like, really, need, three? If the doctor did the x-rays she’d stop at the first one if she could see conclusive evidence. But no, gotta make sure the radiologist has all the angles he/she might need even if the first would have done it.

“Please step behind the glass with me.”

“OK, that’s it. After the radiologist has a look, they’ll call your doctors office,” the technician said.

Seems like a lot of middle people here… “OK, thank you.”

We headed home. I stopped and treated the girls to Jamba Juice. I parked Clifford the Big Red Truck in a spot designed for a Smart Car. I got out and squeezed in between vehicles to help Berzo get out.

Overheated. Overstressed. Still recuperating from a cold virus I picked up last week. Carrying no small load of guilt that yet again one of my kids injured herself on my watch.

I long to call my dad. He always had a simple way of breaking things down.

“You had a heluva day, kiddo,” floated across my mind in his rugged voice.

The doctor called. It’s broken. Damn.  They put a splint on it and told us to come back in a week. 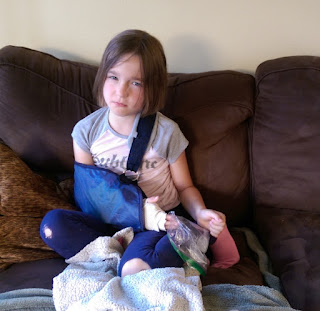