I led a group of very bright First Graders in reading The Little Legends: The Story Tree.

This book is humorous, relatable, and action-packed. At the end of each chapter, we stopped to work in our Study Guide and the kids groaned. Not because the study-guide was overly onerous—it wasn't—I wrote it so it was awesome and fun (wink), they just couldn't wait to see what would happen next. They laughed in all the right places and felt conflicted and tense at times as they tried to figure out who were the good-guys and who were the bad guys. It's complicated...

For kids this young, reading this book in a group is best as some of the concepts and some of the vocabulary was challenging. But with proper scaffolding in a group setting the kids learned a lot while having a ton of fun. The discussions they had were fantastic!

The strength of this book is how it made the kids think deeply...

E.g.:
The Mayor of Tale Town is a tyrant that is selling selfishness and self-aggrandizement as safety by building a wall around the town and keeping all non-humans out and away from the Story Tree. The Story Tree was planted by humans and trolls centuries ago. This provokes a war. Our young heroes are caught in the middle, banished by the mayor, but trying to stop the war and find a better way to end the Mayor's tyranny.

The Troll army, consisting of all banished races, are ready to fight to regain control. The troll leader, Hurrilan, could become the new leader of Tale Town. But they ask themselves would that be any better? He resentful and distrustful of humans. Would he end up as tyrannical against humans? You'd be astonished at the ideas from six and seven-year-olds on the topic.

Mayor Fitch also presents the idea of "history is written by the victors" which spurred a lively discussion.

However, there is also a courageous chicken. And a half-blind dragon. And super-smart gorillas. And a quirky magician that accidentally turns himself into a bowl of pasta. So. Much. Fun.

We started with this volume (6) which came with a couple of challenges. There are a lot of characters, and there are some references to the other volumes. We overcame the abundance of characters by photo-copying the pictures and cutting them out and pasting them on popsicle sticks as puppets. When they were introduced, we found the puppet and wrote the name of the character on the back. The kids took turns animating the puppets when it wasn't their turn to read.

When the book referenced an earlier volume, we'd stop and speculate as to what happened in that story.

The vocabulary was challenging too, but it was a fantastic opportunity to learn new words, and I was always right there when the reader got stuck.  At the end of the chapter we'd write three new words in our study guide and each person would choose their favorite.

A great read for kids. It was chock full of fun, adventure, and seeds of wisdom.

Now for the fun part. Each reader wrote their own review: 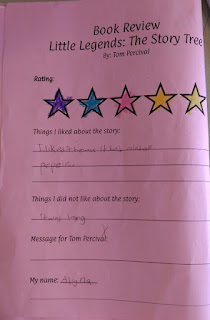 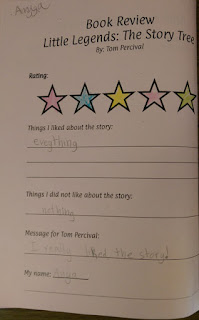 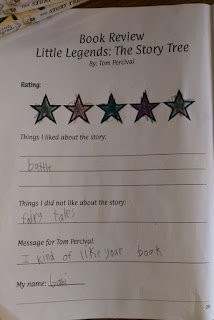 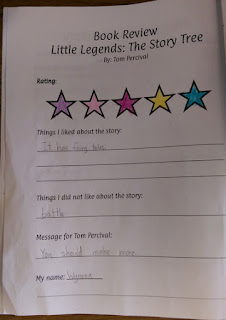