Tiny Tyrants all in a Row

I help out in my daughter, Berzo's, kindergarten class once a week.

Today, the kids harassed me the entire period to go out to recess afterward to push them on the swings.

The first recess I spent with her kindergarten class, Berzo and I went to the swings and I gave her a push. I offered a push to Berzo's two best friends too. Suddenly all the swings filled up and hung still (the ones that were already swinging stopped) as the rest of the class sang out, “Push me! Push me!” Ug. So I do. I push each kid in turn, as the ones not currently being pushed yell at me.

Berzo loses interest and wanders off with her friends. I finish up, wave goodbye to all the yelling kids and follow after Berzo . A flock of kindergarteners comes with me. Berzo isn’t amused. *sigh*

Soon recess is over and I walk Berzo back to her class. I give her a hug and tell her good-bye. All the other kinders crowd in for hugs too and their teacher tries not be annoyed by the distraction.

So I usually avoid going to recess.

Today, in a moment of desperation, I said I would go to recess if they were extra good for the teacher while I was there. They weren’t, but I went anyway because they are adorable little tyrants.

They all ran for the swings and hung there shouting at me to swing them. I faced each kid on their swing, pulled them towards me, and let them go.

Berzo says, “I don’t need a push because I know how to pump!”

She’s going pretty good by the time I get to her so I skip her by and swing the rest of the kids. I come back to Berzo and ask if she's sure she doesn't want one too.

So I catch her swing and pull her towards me to let her go. Her body weight was already shifting back and plop she falls right out onto her back and bottom. Essentially, I jerked her right out of her swing.  I let go of the swing and she’s lying flat, saying, “I’m OK. I’m OK." The swing passes right over her. Then she sits up and the swing clocks her on the back of the head. She’s still trying to keep it together as I scoop her up and take her over to the bench to sit down.

The rest of the dangling kinders kept yelling, “Swing me, Amy!”

Berzo said into my shirt, “Why did you have to swing me? I was rocking it on my own!”

Her back is all scratched up, her head is bonked, and worst of all she’s super embarrassed.

I did all that to her.

She is angry with me as she clings to me for comfort and uses me as a shield so no one can see her tears.

Soon her friends run over and check on her, she puts on a brave face. Then she gives me the what-for a couple more times. I give her a last hug and flee the playground.

Whatever they pay kindergarten teachers, it’s not enough. They are miracle workers. I’m with the class one hour, one day a week, and I leave with a headache. Every. Damn. Time.

My fur-kid Adi and I take a walk every morning on pretty much the same route. On a corner, a tall lilac waves hello. I stop and take its flowery hand in mine and breathe in their lovely scent. The perfume triggers a wormhole in the spacetime continuum to the spring and summers of the early eighties.

In those years we lived in the small town of Blue River.  It had a tiny grid of houses on gravel roads that nestled into the north and south sides of the main road.

In many ways, it was the best of all worlds. We had plenty of neighbors and had no trouble finding other kids to play with. We had a beautiful park that was bordered by the Blue River, which drained into the Mckenzie River. Since the Blue River was more of a creek, we could play in it without worry of being swept away, as we were taught would happen if we became complacent around the cold, swift Mckenzie. There were stores that would exchange our cans and bottles for candy money. There was a gas station, post office, liquor store, cafe, tavern, and a laundry mat. We even had a library.  It was established and run by Mrs. O’Brien, who welcomed us in and forgave us the books that got left in the rain.

It was all very cozy. 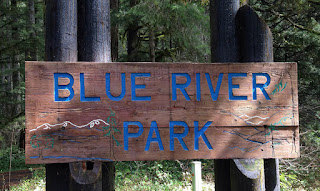 Bordering the town was wilderness to be explored. And we did. Every inch of it. We found every cave, climbed every hill, and rolled in every patch of poison oak.

One house down the road from ours had a tall fence dripping with lilacs. The fragrance greeted me whenever I cruised by on my bike.

Although I don’t remember how or when it started, my brothers, sister, and I would let ourselves in through the beflowered gate, pet the dog, knock on the door, and ask for food.

Seemed so natural at the time, and so odd looking back.

Through the gate was a secret garden of sorts. Flowers bloomed in tidy beds that bordered the bright green grass. The dog, Winnie, was short of hair, pudgy of body with skinny legs, and black with white tuxedo markings. He greeted us with licks and a wagging tail, paws dancing in the grass.

The lady who lived there was known to us as Mrs. Eleanor. To everyone else, she was Leanora Walp. She was the archetypical grandma. She was short and roundish and usually dressed in pastel colored polyester pants with a flowery top or knitted sweater. She had lively eyes behind her glasses, and a kind face topped with short, fluffy white hair.

After a bit of small talk, she would offer us something delicious. She had a large garden in her backyard and grew and canned her own food. She made the best pickles I’ve ever had. They were fat cucumbers with flowers of dill floating in the jar. She also made delicious fruit leather; thick strips of dried berries and apples that were both tart and sweet. We thanked her in turn and ran off with our goodies.

Someone should have warned her about feeding the wildlife because once that got going we knocked on her door all the time. Never once did she seem annoyed by the grubby little beggars at her door. Sometimes she invited us in. Once I remember touring her garden. Mostly we went as a group, but I remember knocking on her door solo too.

That witch from Hansel and Gretel was onto something… Luckily for us, Leanora was as kind as she seemed.

Looking back I can see her influence on my life. I like to ensure I have plenty of my family’s favorite food around and I also add things that I know my kids’ friends love. The girls and I make treats around the holidays to share them with friends and neighbors. We also bring around goodies from our garden. I specifically planted lemon cucumbers with Boot's friend in mind and raspberries for Berzos'.

When I’m elderly, I hope that instead of a lawn I have a lovely secret garden with lilacs spilling over the fence. I hope I have a Winnie-dog. I hope I'll get surprise visits from my grandkids and their friends.

I’ll have to start working on my pickle recipe. 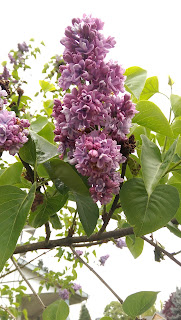