This might come as a shock to you, brace yourself—I'm a little bit of a geek. Not a nerd exactly, as they tend to be more academically inclined than I am, whereas I just get super-passionate about something for a while. The more irrelevant it is to my daily life, the more I seem to enjoy immersion in the topic. Lately, that topic has been DNA.

If you and I are FaceBook friends, you probably already know a little bit about this already.

I’ve had my DNA tested twice.  For the first test, I signed up for The Genographic Project to slake my curiosity about my family heritage.  For the second, I used Color Genomics service to find genetic mutations that are linked to cancers and other diseases. (Read More)  Just to end the suspense: “No mutations were identified.”  Woo hoo! Light me up a cigarette, pass me some red meat, and let me slather on some aluminum-based deodorant. Hoo yeah, that felt good.

Anthropology and Human Migrations
In addition to my personal family heritage, I also have a lingering interest in Anthropology that evolved into an interest in understanding the waves of people migrating out of Africa into Asia and Europe, and finally into Australia (about 50,000 years ago) and the New World at the end of the Pleistocene (about 12,000 years ago).

To make a very long story short, early migrations washed proto-humans in, stranding them in human tide pools for hundreds of thousands of years.  This left the early humans (likely Homo heidelbergensis) to become Neanderthals and Denisovans, and other yet-to-be-discovered species.  Then waves of modern humans emerged from Africa, starting about 60,000 years ago, and flooded them out.

Sitting in Anthropology 101 back in ‘99, our professor told us of two theories behind the extinction of Neanderthals:
Although War was the generally accepted theory, he favored the Love theory.

About ten years later, DNA evidence would prove him right, at least partially. Neanderthal numbers had already been declining at the end of the Pleistocene, but modern humans and Neanderthals co-existed for around 20,000-30,000 years before the last of the Neanderthals disappeared around 40,000 years ago. Today, traces of Neanderthal DNA live on in almost all people of European descent. My results show that 1.1 percent of my DNA is Neanderthal in origin. They weren't wiped out, they were absorbed. Ah, la'more.

My Family Heritage
As a kid, I'd often ask my dad, “What are we?” The story goes that our family began from a soldier in Lafayette's army, (I'm unclear as to whether the soldier was  French or American) and a Native American woman. In the 200ish years since that time, his heritage came to also include Scotch-Irish, (whatever that means) and English on his father's side, and German from his mother. She was born from immigrant parents. 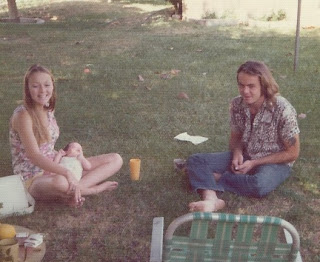 On the other side of my family bramble, my mom had no idea about her heritage. She had never met her father, so other than “some French” heritage from her mother, she had no clue from whence she came.

Aside from our music, American culture basically consists of a penchant for being overweight consumers fast food, lattes, and Ikea shelving. This always bothered me. I want to know what pockets of the world have vestiges of my roots. Where did I come from? Who are my people? What are our stories? How am I connected? 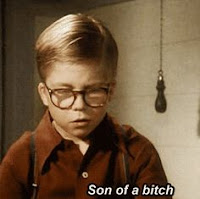 I ordered my DNA testing kit for my birthday last year. With dancing feet, I opened it, and read and re-read the directions. I registered my kit online, then swabbed my cheek, packaged it back up, and dropped it in the mailbox. Like Raphie from A Christmas Story, I checked my electronic mailbox daily for updates. Unlike Raphie, my decoded genome did not tell me to drink my Ovaltine. The results were fascinating and surprising. My dad’s family story was vindicated (see the 2% Native American) and the mystery of my mother’s revealed.

Here is a snapshot:

What surprised me the most was how blobby and undefined the regions are. There are no crisp lines delineating heritage of particular countries. Apparently, you can't put borders on love.  Check out the "Southern Europe" region:  that's a big part of the map.  Humm, looks somewhat similar to many of the Roman Empire maps... 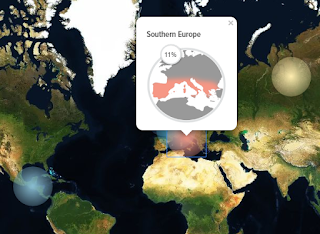 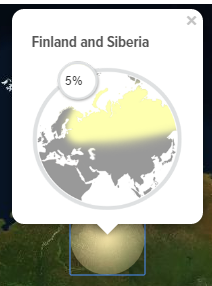 Also, check out the Siberian Region. These people were roaming this gigantic polar region sharing DNA long enough to create distinct markers unique to this population. That then somehow came to comprise 5% of my DNA—have Eurasian Inuit DNA? Sweet!

I just found out that it is likely that my Siberian and Native American markers originated from the same woman who married the soldier of my family's lore. DNA was extracted from a baby who was determined to be of the Clovis people.  They are thought to be among the first to cross the landbridge to North America during the ice age.  The child's DNA shows Siberian markers and DNA common to 80% of Native American tribes.  (The article.)

My ancestors were there, walking across a land bridge that would be swallowed by the rising seas into a land where no other humans lived. There they lived for almost 13,000 years until a woman fell in love with a European soldier, married, and raised a family.

I can also see a map my maternal ancestors took out of Africa as revealed through mitochondrial DNA, which is only passed through mothers. So freaking cool. The deep paternal roots are only available on the Y chromosome so my brother would need to do the test to find our migratory paths of our paternal line.

What was also interesting is that I could compare my results with a genetic breakdown of average people who are from those areas. Over half of my DNA markers originated in Great Britain and Ireland. But, it shows that average British natives only have a slightly higher percentage of genetic markers that originated in Britain. Contained in their DNA, is physical evidence of the historical mixing during the era of the Roman Empire and the later the settlements (and invasions) by Saxons, Vikings, and Normans (and others) during the Early Middle Ages appropriately coined the Migration Period.

Learning about history is so much more engaging knowing that my ancestors were living (surviving) and raising their families during these times.

It also shows me just how ridiculous racism is. Aside from some remote tribes in deep forgotten parts of the world, there are no pure races. The angriest KKK members, or other rampaging terrorist cells, likely share lineage with groups they persecute. If Hitler's DNA is similar to the average German native today, at least 5% of his DNA was of Jewish origin.  In fact, we're all a little more closely related than we should be—several times during our prehistory we experienced what scientists call a "population bottleneck" meaning we narrowly avoided extinction and barely maintained a minimum viable population.

We are all one big inbred family.

The other thing that struck me is the incredible luck involved with any of us being here. Each one of the seven billion of us descended from an unbroken line from the first life form on earth. Every one of our ancestors survived every cataclysmal event, disease, random accident, act of violence, predation, floods, fires, giant dinosaur feet… We are the result of an unbroken line extending back 3.8 billion years and all of that is still with us, written in 3.3 billion base pairs that comprise the human genome.

There are no lines.
Our very existence is a miracle.
We are all interconnected through time and space and love.

Why are we the only human species still alive?  - BBC Earth

What's in Your Genes?: From the Color of Your Eyes to the Length of Your Life, a Revealing Look at Your Genetic Traits, by Katie McKissick
An exceptionally informative, yet-FUN-to-read book.  She explains what DNA is and how it functions in clear language with pencil illustrations at just the right moments in the text.  She explains base pairs, RNA, mDNA, protein construction and how your genetics are responsible for everything from your eye color to your hairy asscrack.

The Sea Wolves: A History of the Vikings  by Lars Brownsworth
Although it could benefit from better organization, the book is fun to read as well as informative.

The Normans: From Raiders to Kings by Lars Brownsworth
A highly readable history of the Normans movements to Britain, which includes their relationship to the Vikings and some of the major players from the Sea Wolves book.