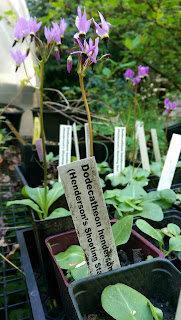 If you're anything like me, a spring hike makes you covetous of the delicate woodland flowers that are blooming along the trail. As a kid I used to trek into the forest and dig up flowers and ferns and transplant them into my yard. Sword ferns, bleeding hearts, trillium, fawn lilies, all submitted to my trowel. It wasn't until I was a teenager that I first heard that digging up wild plants was illegal. I was incredulous, "What!? Why!?" The rebel that I was, I continued my plant-snatching ways, but I was more clandestine about the whole operation.

Hand over my heart, I have reformed and have left my lawless ways behind me, but I still have an abiding love for the beautiful plants and flowers that have adorned many of the happy places of my life. Luckily, I can buy these same plants—legally—from the Audubon Society during their annual Native Plant Sale. And you can too, the sale is this weekend and they have thousands of plants, many that are hard to find like, trillium, fawn lily, wild ginger, camas, iris, woodland strawberry, oxalis, nine-bark, evergreen huckleberry, red currant, Indian plum trees, ferns, inside-out flowers...

To make amends shady past, I also volunteer at the nursery once a month all year. If you buy a plant this weekend, it is likely that I've either potted, pruned, weeded, hauled—or in some way put a fingerprint on it. But don't let that deter you. The sales goes all weekend, April 23 and Sunday, April 24 from 10 a.m. to 5 p.m. at the Audubon Society of Portland.  If you missed the sale, no worries, there are a few available in front of the main building almost all year.

BTW - If you want a trillium, go early, they usually sell out the first day...

Here is a preview of some of the plants that were on the move for the sale, when I was working last Sunday. 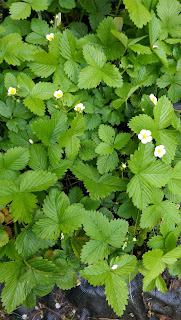 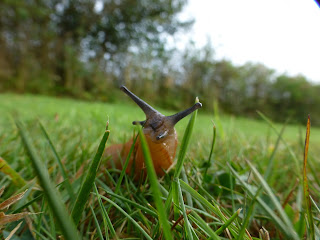 In my pocket, rests a packet of honey. I slide my hand hold it a moment, a smile plays on my lips and my chest fills with love for my daughters.

This parenting gig is rough. I'm glad I didn't know the toll becoming a parent would exact from my vitality, body, relationships, finances, career—what's that?, sanity… ...because—gasp—maybe I would have done things differently. And not having my girls would be the only lamentable loss in this scenario.

So I've messed up, a lot. Turns out I'm not as patient and kind as I thought I was. I can be downright cranky and crazy yelly. Seriously. I've struggled, see here My Rough Day and here The Great Shower Debacle and here Rise of Cave Berzo. And those are only the ones I've shared publicly—it's rare that I go a day without feeling humbled in someway by my lack of parental awesomeness.

However, today is not one of those days. Today, I noticed a wonderful characteristic about both of my girls. They are both bootstrap conservationists in the making. Before you groan about goddam-tree-huggers, hear me out. We were at a park today that has several ponds. My girls were looking for the two overgrown coy fish when Boots spotted an old plastic sack half buried in mud, half floating in the water. She ran up to me, (I was on the paved walkway, not getting muddy) and told me about it. I told her she could fish it out with a stick if she wanted to, and she dashed off to find one. While she was looking, Berzo reached in and pulled it out. It was nasty. Boots hung it on her stick and ran it to the garbage can. Then they found two more pieces of trash and repeated the process. I didn't interfere, just noticed their efforts verbally ("You cleaned up three pieces of trash, blah, blah, blah.") and moved on with the rest of our trip. 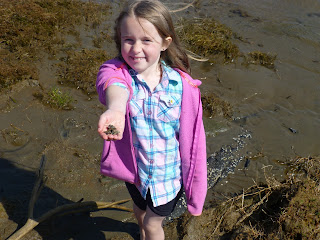 Then, just a moment ago, I felt the honey packet and everything suddenly zinged together. They do this stuff all the time. The honey packet is to satisfy a request from Boots that we have an emergency honey bee feeding kit available when out and about. We found a wayward honey bee at the park two days ago and couldn't do anything to help. It just walked on, a dying traveler in a concrete desert with no nectar oasis to save it. Boots went to the concession stand that happened to be open and asked if they had a honey packet. She returned empty handed. That's when she asked me to keep a packet in my bag. I agreed, and the next day when I got a tea at Starbucks, I put a raw sugar in my cup and a honey packet in my pocket. 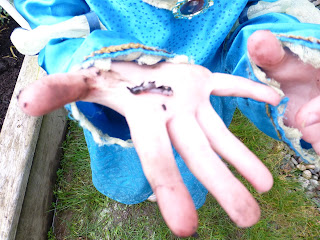 We routinely rescue worms, honey bees, bumble bees, and spiders. We pick up trash, when we're out on walks in our neighborhood. We hang up bird suet in the winter, we have brought injured birds to the Audubon, and Charley will bring home frogs that wander into his shop to release in our wetlands. When we go to the lake we bring an extra paper sack to clean up all the broken glass, dirty diapers (seriously), fishing tackle, and other garbage. I volunteer at the Audubon and help out in the native plant nursery, often Boots comes with me, working harder than she ever does around the house. We've bought many of the plants for our own yard to replace the non-native ornamentals.

We've always done these things, I've never really given it much thought. Then when I read the term “Bootstrap Conservation” in the book entitled, Last Child in the Woods, recently, I realized that that's what we're doing, on an incredibly small scale, of course. But even pennies amount to dollars especially when you have help collecting them. Does this mean my girls are going to grow up to be be-dreadlocked loonies that chain themselves to trees and sing Kumbaya while heavy equipment grumbles all around them? No—well I hope not. What it means is that they won't pass by a problem and and think, “Someone should do something about that.” Instead they reach into the muck pull out the garbage and put it in the trash can. Instead of lamenting the declining honey bee populations, they'll plant native wildflowers and give a wayward bee some honey from their rescue packets.

They won't be the type to watch and whine, they won't expect accolades for their conservation efforts, they'll just see something that needs doing, then do it.

And that makes me think that perhaps, just perhaps, I haven't completely bungled this child rearing job.