Sparks at the Park 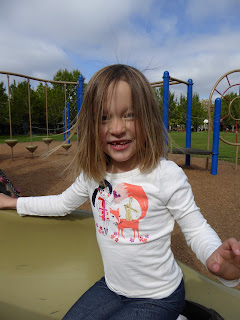 A giggle erupted from Berzo. She peeked at her shadow on the wall of the slide then propped herself up to face me. Another giggle shook her frame. Her face was alight with mischief, her hair stood out in all directions and swayed with the breeze as she she reached out to touch me.

Berzo's hair is flat now as she climbs up the slide and slides down, again and again, until the shadow of her hair reveals she is "fully charged." Then, once again, she comes for me.


***********
Berzo and I finished our grocery shopping and in keeping with routine we stopped at a park to play. After playing a couple rounds of Don’t Let the Pigeon Drive the Bus I was seeking something else—anything else, when I pointed out her baby-fine hair sticking out in all directions. I lightly brushed the levitating ends with my hand and she tried to grab me to pull herself up. I pulled my hand away and said, “Oh no, I can tell by your crazy hair that you’d give me a good shock!” Her quizzical look gave me a flash of inspiration. Time for a physics lesson kiddo! Summoning my inner Faraday I sifted through the jargon in my head and found an explanation comprehensible for a four-year-old.

"When you slide down the rubbing of your clothes against the plastic slide creates... [one piece of relevant jargon should be OK] ...static electricity. When your hair is sticking up I know you have a lot of static built up and if you touch me—zap! Ouch! Can you see your hair in the shadow? OK, now touch me…"

ZAP! Acck! I really hate being shocked, and these zaps pack a punch. I wished it was dark so she could see the spark.

Explanations of atoms, electrons, ions, insulators of plastic and cloth, and magnetism all flashed through my head, but as a credit to my self control, I set them aside in lieu of play. I know from my own childhood how these early, fun experiences will lay the foundation for learning about these topics academically later in life. Spinning on merry-go-rounds, swinging, teeter-tottering, bouncing a ball, static—all swirled in my mind as I sat in my twelfth-grade physics class. I wanted to do my best to make this experience stand out in her memory. 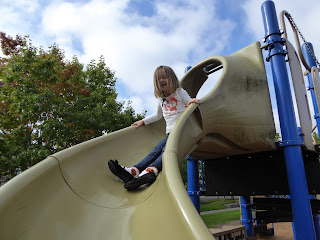 On and on she went, up and down the slide building a charge, checking her shadow to see her hair voltmeter, with me dancing around but eventually submitting to the ZAP! Occasionally I’d be out of reach and she’d jump off the slide and to her disappointment, no ZAP! I took the opportunity to explain grounding in four-year-old ease, “The static electricity drained right into the ground as soon as your feet left the slide, it doesn’t insulate like plastic. HA! HA! You didn’t get me!” Which sent her right back up the insulator/slide to recharge herself.

It made me wish I had a pocket full of paperclips, so we could play with the relationship between electricity and magnetism. With a her hair in spikes I wonder how many paperclips we could get to stick to each other—if the charge was great enough to get even one.

My diabolical plan worked. She enjoyed shocking me until I finally had had enough and raced her to the climbing tree. I think the lesson stuck too, because later that day at one of her famous “trampoline parties” she was chasing and zapping her older sister and friend. I rescued them by wetting the trampoline mat down… Then I asked Electra if she’d like a swimsuit so they could play with the hose and squirt guns.

Whether or not Electra is a superhero or supervillain is yet to be determined... 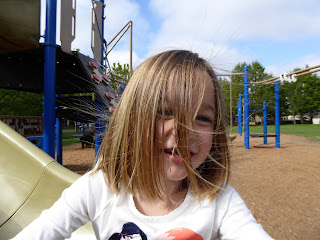