Yesterday, (May 19) started off gloomy. The clouds outside mirrored my inner self. I've been struggling to parent Berzo lately. She has been in a awful behavior phase for over a year now, which only appears to be worsening. At three years old, she doesn't respond to reason when she's upset, yet her intellect is developed enough such that techniques that worked well when she was littler, i.e, distraction and redirection no longer works—at all. I was really good at it too, I could move her from a conflict into something constructive and fun. Now we have to duke it out, every time, all the time. It's exasperating and usually embarrassing too... 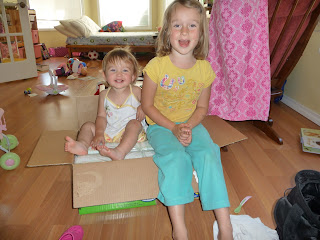 Being a stay-at-home-mom, guess who I point the finger at with these behavior issues? Yep. Me. Berzo was the sweetest, tenderest baby and young toddler, somewhere in the middle there I bungled something up.

I woke up with the weight of this slumping my shoulders. Berzo slept well the night before and was in an unusually light mood. It was nice.

I decided to dissect this problem into it’s components and face it head on. 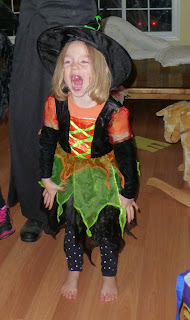 Problem #1: Berzo spends too much time on the computer, overloading her screentime and creating all kinds of conflicts, “MY TURN! I WAS WATCHING THAT! GO AWAY!”. Berzo taught herself to find games, Netflix, and pictures. To remedy this I decided to unplug the computer during the day. Because she was having a good day, she fussed only for a moment, then went right over to the toy bin and spent the next half hour setting up a pretend picnic. Yes! Success, a half hour of screen time just turned into a half-hour of creative play. Maybe I don't totally suck at this job! We sat down together and had a nice pretend picnic-tea party.

(More numbered problems to come, but first join me to see how the day plays out..)

Then it was off to the store for errands and park time. This is where things got ugly.

Berzo doesn't want to play at the park today, so we head straight to the store. (Whose kid doesn't want to play at the park?! My kid. I like being outside so my kids get their fill of park time…) We only need to pick up a few things so I opt for a small cart. I got the tingle of eminent trouble right away as Berzo charged around the store with no care as to where I am. I should have insisted we go to the park first.

We check out the toys, (because I followed her there) and shortly thereafter we head into doing our required shopping.  She's laughing and dashing around, which turns into a one-sided game of hide and seek. I refuse to participate, but that doesn't deter her. I try to pace my shopping with her dashing and manage to get her to come out of hiding to get a cookie at the bakery. I figure she'll nibble it until checkout, which is imminent, and we'll be fine.

She dashes off. I call for her and her head pops out from a aisle, eyes alight with laughter. I tell her sternly, “Time to go. I'm checking out.” She cackles and disappears back into the aisle.

I check out, expecting her to come out at any moment and start hanging on me. She doesn't. I finish checking out—still no Berzo. I'm getting exasperated. I start going up and down the main drag calling for her. I ask a couple staff members if they've seen a little girl in a green shirt.

I continue to pace the main aisle. It's been about five minutes or more since I've seen her last. I'm starting to get worried, and ask them to rally for a search. The overhead speaker system blares out my shame and I feel my cheeks get hot. I continue to pace and start looking in areas I haven't tried. The department store is about a million square feet so I picture us missing each other as we go by.

I secretly hope she's scared and crying at this moment.

My mom radar picks up her voice—she sounds upset. I flash off in that vector, nearing light speed, and there she is—fighting off two employees as she yells them, “I don't need your help finding my Mama! I CAN DO IT MYSELF!” She's anchored to the ground and my mom-sense tells me she manipulated the laws of physics to make her thirty-five pound self weight about 335 pounds. We make eye contact and she gives the befuddled employees a look that said, “Way to go guys, you totally blew my hide-out.”

I thanked the employees and got down on my knees and held her eyes with mine and told her, “I brought you in this world, and I can take you out of it.” KIDDING! I wanted to say that, but I held her arms firmly and told her that I was very scared, I wasn't playing, I'm not playing, and she is to NEVER hide from me again unless I have agreed to play and I am counting.

I wish that was the worst part of my day.

Soon we get Boots off the bus and then it's time to go to the dentist for a cleaning for all three of us. The amazing CC takes Boots and Berzo, and I go to my hygienist. Soon Berzo is done and is showing me the contents of her goodie bag. She had a great time. I'm laying down on the chair mouth gaping with pointy instruments scraping my teeth when the dentist rolls in and tells me that Berzo was great and sat really still for her x-rays so they were able to see all eight cavities.

They are in between all her molars. Boots has yet to have a single cavity. But, Boots doesn't steal the lemons I've squeezed off the counter and chew on them for another hour. Just imagine the loosely bonded H atoms, dancing by then joining hands with minerals in her teeth then do-si-do-ing them away.

By Berzo's age, Boots had experienced candy like three—maybe four times. And dessert treats were limited to Opa Thursdays. Boots drank juice, but only occasionally and she certainly doesn't swish it around in her mouth like Berzo does before swallowing it. I have become lax, and desserts and treats are a regular occurrence now. Boots never forgets to ask for a dessert, and if big sister has one…

Know what the worst part was? All full of hubris about safety, six months ago at the previous cleaning, I requested that my girls be on an as needed basis for X-rays. Something hurts or you can sort of see something? Then X-ray. The dentist and I compromised by saying as needed and/or every two years. We agreed that we would wait until next time (today) to get a set of X-rays for Berzo. I'm all about getting their teeth cleaned by professionals every six months, but shooting their skulls (there's a baby brain in there!) with radiation beginning at the age of three just seemed reckless. I didn't get my first dental x-rays until I was eighteen. Only in the last few years have I been regular about going to the hygienist, and I hate getting X-rays, zap, zap, zap then a panoramic, zaaaap. That just can't be good.

Not unless your kid has eight cavities. The dentist had the good grace not to say, “I told you so.” Although I deserved it. Boots is still on a two year rotation, but Berzo will be getting regular X-rays to make sure the four almost-need-to-be-drilled cavities aren't ready for drilling. Oh and I refused to give my kids the fluoride supplement as babies either—too toxic for me.

This brings us to our next problem.

This one is a little bit easier for me. I won’t buy sugary stuff and it won’t be around to eat. Charley and I also decided we'd find other ways to treat the girls than buying them something sweets. Instead, we’ll let them pick out a book or small toy, or just do something with them that they really like. I’ll toss the lemons immediately after juicing them into the foods and lemon-aid is forbidden. If we can limit treats to special occasions, grandparent visits certainly qualify, coupled with a rework to our dental hygiene routine, I think we can put a halt to this problem. Problem 2 is likely related to the next problem…

Problem #3: Berzo's behavior is out of control.

She yells at people and other kids, is highly unsocial, and doesn't make requests so much as demands from Charley and me. Basically she tries to control everyone in the family and melts down whenever that doesn't work—which is all the time. When Boots was going through this Charley and I spent copious amounts of energy talking about social situation and our behaviors. Boots and I read books about sharing and caring together. In typical second child fashion, we simply haven't given her the same investment in energy. She still seems so young compared to Boots, I forget her level of intellect is the same as Boots' was when I was working with her on these same problems. Boots is a wonderful, kind, thoughtful, caring kid—now. She still messes up occasionally—and so do I—but all in all she's amazing. It was a lot of work and very frustrating at times, but now it's Berzo's turn and I need to stop waiting for her to magically grow out of it and start working with her more directly.

Why am I sharing all this? The same reason people write down their New Year's Resolutions. I'm laying it out to organize my thoughts and goals and hold myself accountable. I hope people will ask, so how's the no-candy thing going—give up on that one yet?

It's hard. I feel like I'm swimming upstream most days. Sometimes the current is nice and it eddys for a while and sometimes it's a rushing torrent. Lately when the current gets rough, I just grab onto a log and jump out for a while. I need to swim it with her and show her the way. It's worth it—she's worth it. So please remind me of these promises when you see her on the computer rotting her brain with My Little Pony re-runs, or running around with a sucker rotting her teeth, or yelling at your kid rotting her heart. My pride can take it, because I don't have any—parenting is nothing, if not a humbling experience.

This was a tough day to live, but I'm glad it played out this way. It was exactly the shock I needed to resuscitate my parenting skills development, kinda like getting an F on a paper tells me I'm not putting in the effort. It reminded me of what a capable partner I have in Charley as we worked through each issue and adjusted our habits and routines. Even Boots is on board, even though it means less treats and more work on her part, e.g. teaching Berzo good social skills by example. In the end these problems are opportunities to bring about positive changes in our family. We are lucky to have each other. 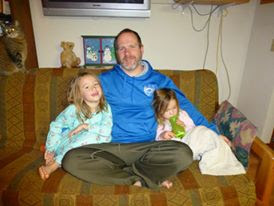