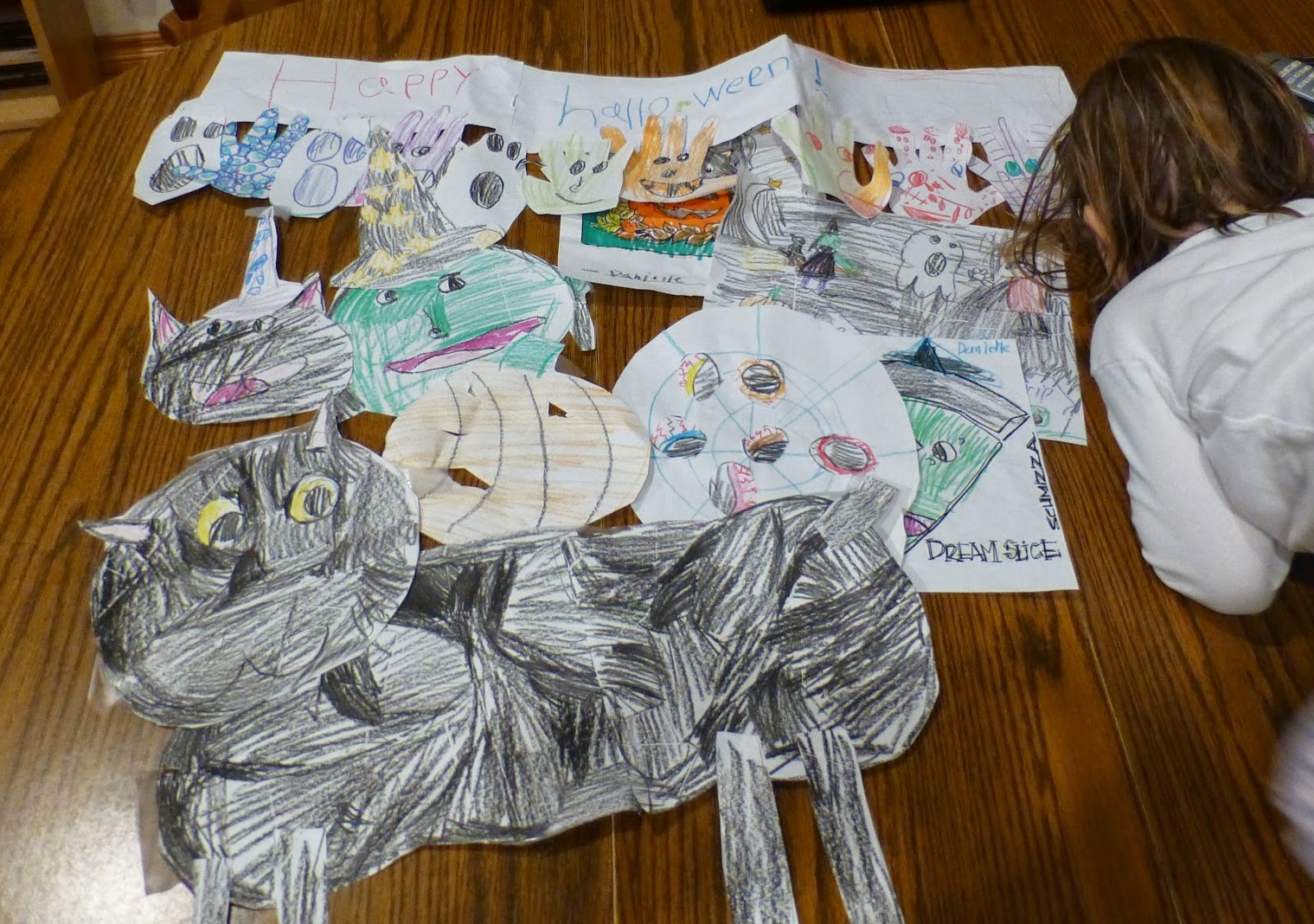 Halloween is another one of those days where having kids makes it exponentially more fun. Their exuberance is infectious. As soon as the calendar read “October,” Boots and Berzo were hard at work making Halloween decorations. One of Boot's first efforts produced a black cat that adorned our front storm door. Drawings of witches with green faces and black hats appeared on our windows. Pumpkins, bats, even eyeballs-trapped-in-a-spiderweb, graced our refrigerator and all other empty spaces in our home. Berzo would randomly shout, “I have to draw a pumpkin, Halloween is almost here!”

Our house interior properly adorned, the thoughts of my girls turned to costumes. Boots was a “spooky witch” last year and wanted to do that again—but with a new dress. Berzo decided she also wanted to be a spooky witch. Then she wanted to be Elsa, then spooky witch, and finally, after much deliberation, settled on spooky witch. Inspired by my friends Matt and Lori, who plan a family themed costume, I decided I would dress up as a witch too and form our own little coven. Easier said than done. Finding little girl witch costumes was easy, there were two on Zulily that were adorable and affordable, ordered, done. I had a difficult time finding a witch costume that didn't have the word “sexy” in the description. And by “sexy” they mean “kinky lingery sexy”. Charley didn't mind so much, but I dug deeper. After much searching I found a classic witch costume on Amazon. Horray! I ordered it up with a side of green face paint. 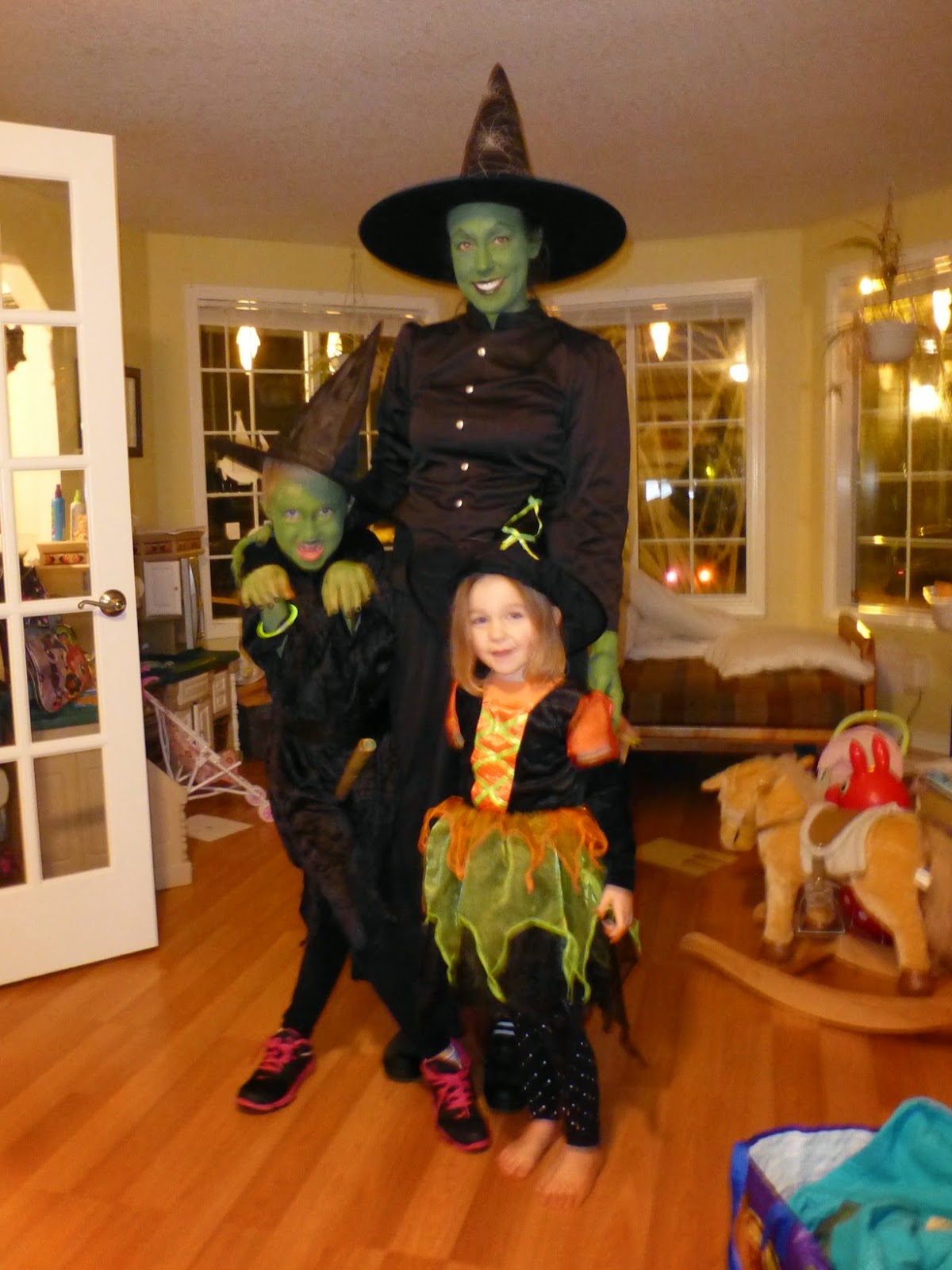 Feeling excited about our family costume, we looked up some warlock costumes for Charley, but there was nothing he could stomach wearing… So we thought perhaps he could be a torch and pitchfork wielding peasant farmer. Reception of this idea was cool, so I didn't get my hopes up.

Inside decorations? Check. Costumes on order? Check. Next item on the list, pester Charley to put up the exterior Halloween lights and decorations. The girls took up this task with their usual gusto. Then one unseasonable warm day we were playing outside and I thought I'd drag all the stuff out to see what was what, and if I might put it up. I laid it all out on the lawn. I asked Charley which end of the ghost lights needed to be on which end of the house so they could be plugged in properly, (I'd guess wrong) he decided to put them up himself. (Picture John Wayne, "Better let me take care of that for ya, little lady.")

I found some spider-web-in-a-bag and stretched it across our big bay windows and added a giant hairy spider. Charley put the spider lights in our red rock which is under the front windows, and Boots repositioned the spiders to crawl up the webbing. And so the first house on the block was all decked out for Halloween.

We filled the time with a trip to the pumpkin patch and trial runs of our costumes and make-up. Then waited some more.

Then we all got sick. Then got better. Then Berzo got a fever, and I got another cold. Then Halloween was here!

Yay! Ug. I wish Berzo and I felt better, but yay!

The first stop on Halloween was to Matt and Lori's for Halloween dinner. Boots and I were late arrivals due to an early afternoon nap (for me-I had a cold) and a time underestimation error, but we made it in plenty of time to enjoy the festivities and food. As usual Matt and Lori put party caterers to shame with the delicious food presented in halloween theme. Spider web dips, brain shaped jello, witch's brew complete with fog and floating eyeballs. There were fried worms and all manner disgusting looking delicious treats.

We played a very cool game in which the kids found clues that would reveal the name of a witch, but be careful to avoid curses! You could barter for clues and curse remedies from other teams.

All the while we visited and played and ate and drank, the rain came in sheets washing the sidewalks and roads clean. Then just as it became dark, the spigots turned off and the cool night air beckoned trick-or-treaters to come forth. And they did…

We dashed home to collect Clark, Mary, Princess Elsa (Amelia), and Spiderman (Sam), then we joined groups with our neighbors and headed out. The kids formed an amoebic mass of nylon and neon that stretched to one door then slid past each other, pooled again then stretched to the next door.

The amoeba split when the longer legged nine-years-old-and-ups decided to cover more ground at a faster rate to maximize the candy collection, while the younger kids and toddlers decided on a shorter route through our neighborhood. About the time we were two-thirds done, the toddlers started lagging, “Mama, I think I have enough candy now.” (What!?! Could you imagine uttering such a phrase as a child? Kids today!) The older (of the younger) ones seemed fine with calling it a night so we nudged the toddlers on and made it home.

Then it was loot time! Candy buckets were dumped and the content thoroughly examined. Careful choices of tonight's treats were made, in-between, ding-dong! “Trick-or-treat!!” Still in my witch costume, I revelled in the opportunity to play my part. I turned on my wicked witch voice, and told the children how tasty they all looked, and,  “Be sure to take some eye balls dearie; they have such a nice gelatinous center." *Cackle* "Oh yes, lovely they are.” One girl asked me how I got my face so green, and I said, “Oh, it's always like this dearie. It's getting it pink the other days, that's the work.” The toddlers sometimes needed some coaxing from their parents to come for a treat… Such fun!

Around eight my cold made my head fuzzy and my face paint was getting crinkley dry so I left Boots, my Wicked Witch of the West in training, and Amelia in charge of the door. They loved it.

After a shower, I put Berzo to bed and my little tuckered spooky witch went right off to sleep, with visions of Snickers bars dancing in her head. 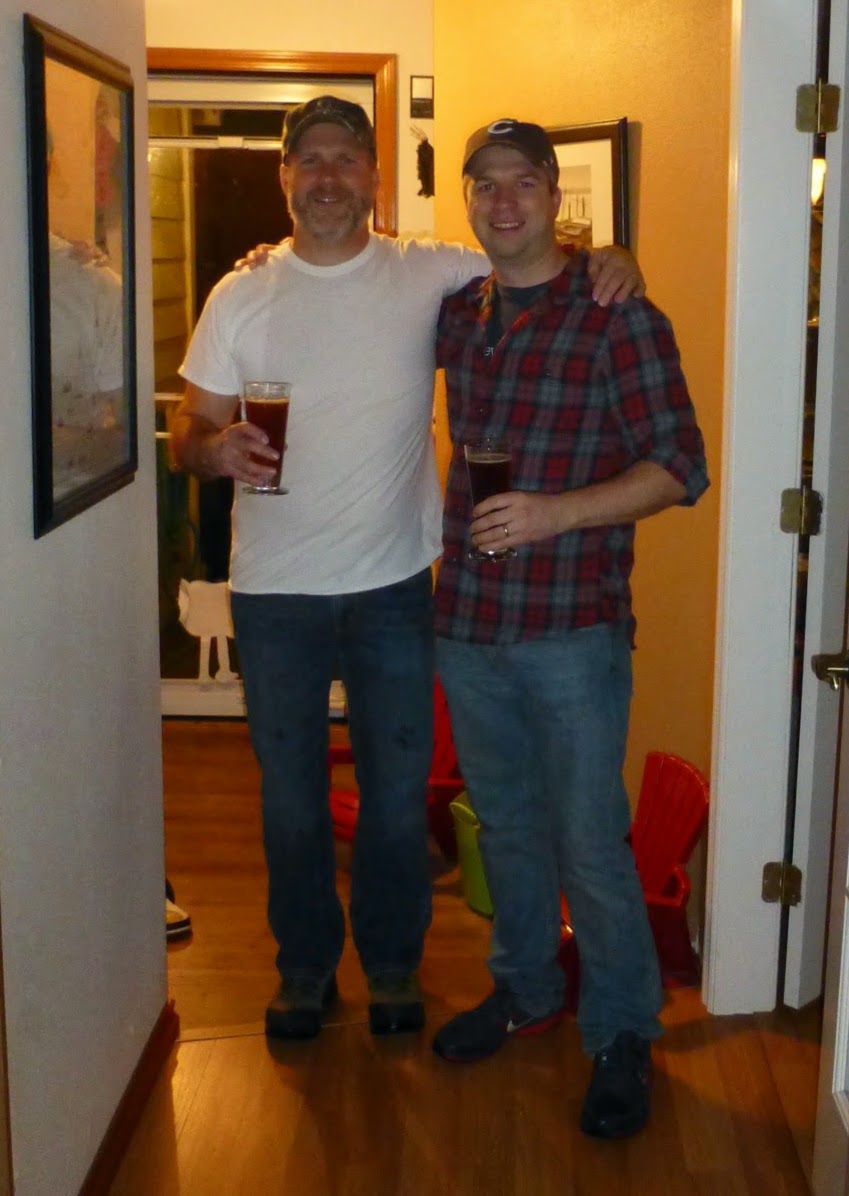 Charley and Clark shared some pints and had more than a few laughs. Sam explored Berzo's toys without fear of retribution while Mary oversaw his activities and played along.

Boots and Mimi were in cousin/best friend heaven as they packed in as much playing as they could before the inevitable good-byes ensued.

I love these holidays—the ones that seemed like more of a nuisance in my twenties are suddenly, once again, magic.
Posted by Amy at 6:59 PM No comments:

For quite some time, every book store, garage sale, grocery story display had copies of this book leaning off the shelf trying to fall in to my basket. I'd pick it up, read the synopsis on the back, ho-humm and put it back down—estrogen and honey just aren't my normal flavors. Then during a library book sale it slipped into my hands, hid among my other selections and I didn't realize what had happened until I had it home. OK, already I’ll read it!

The story is set in South Carolina in the 1960's, during the heat of the civil rights movement. It is a story of a young girl named Lily Owens who is tormented by the blurry memory of her mother’s accidental death at her hands. She lives with a father she dubbed, T. Ray, whose only claim to genius is inventing creative way to punish her, such as kneeling on grits piled on the floor for hours. Kneeling on grits!?

The bees are a character of their own accord. They appear in her room at night and disappear when she attempts to show her father. One assumes that his ambient malevolence drove them back into the safety of her walls. Eventually Lily captures one in a jar to prove it to him. Awash in guilty feelings, she tries to release it, but the bee spins and spins it the jar. She can't understand why it won't fly away. Then in a crux moment where she must face her father's impending wrath, she notices the bee is gone. She realizes that there's no lid on her jar either. She bails out of her father's house, breaks her nanny Rosaleen out of the hospital where she’s being treated before being sent back to jail, (Rosaleen was indicted for dumping her tobacco-spit from her jar on some white men’s shoes--they deserved it.) before fleeing to Tiburon, South Carolina. Which is a name Lily found written on the back of a block of wood, sporting the a label for Black Madonna Honey, she found among her mother's things.

This scrap of her mother's belongings brings Lily and Rosaleen to the home of three benevelovent black women who are, yep-you guessed it, beekeepers. Here Lily learns to send love to the bees, reconcile her past, collect honey, learn to trust, make beeswax candles, belong to something bigger than herself, cool bees on hot days, the truth of her mother’s story, cook honey, even understand her father, and finally finds the home she craved.

This is a heartfelt story that also has teeth. It challenges our perceptions and changes our lives in a honey flavored way.
Posted by Amy at 4:23 PM No comments: