An Oysterville Regatta to Remember 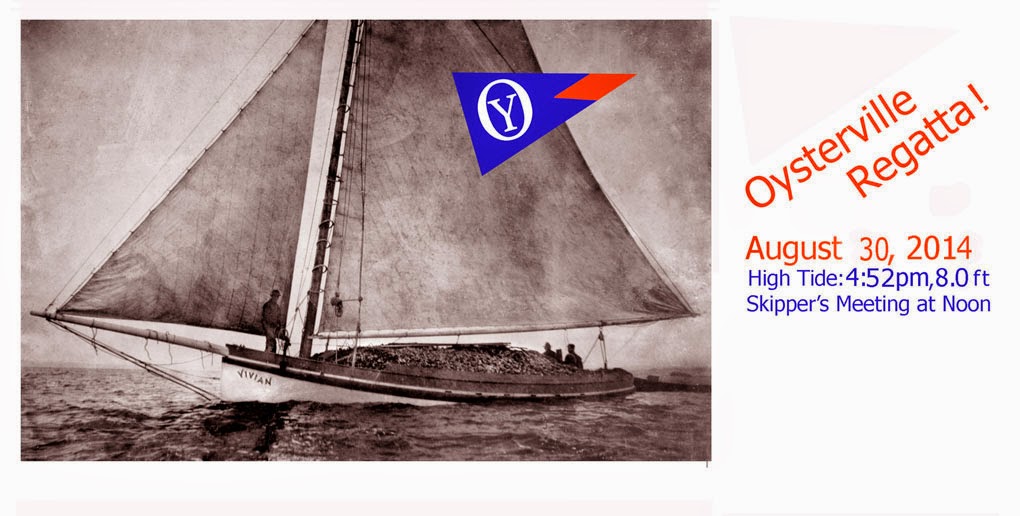 The day of the Oysterville Regatta dawned gray. Sure it would soon burn off, my littlest, Berzo, and I walked through the quiet to the Oysterville Store for a treat. A light mist followed us there. As we threw sticks for Bhima and visited with Greg, the sun tried to pull through. I was certain it would. On the way back to the Cordray’s house, the sky darkened as the clouds filled their basins, then they opened the spigots—right on our heads. I hoisted Berzo to my back and trotted back, laughing along with other wayward morning walkers.

Oysterville is simply dusting herself off for her big day today.


The regattas of Oysterville's heyday were organized by the Shoalwater Bay Yacht Club in the early 1870’s. Nearly all the oystermen participated in the much anticipated thirty-mile race.

The boom of the town cannon sent majestic plungers and their crew of sailors swooping across the water in hopes of winning a silver cup. The ships were captained by such familiar names as Loomis, Crellin, and Stream. My husband's ancestor likely captained his plunger, The Vivian, in the races.  Afterward, the village turned out for the “...Regatta Ball, remembered as the crowning social event of the season.” Images of America, Oysterville, by Sydney Stevens.

The Oysterville Regattas of today are organized by the Tucker, Carol and family. Although contemporary regattas are of a more modest scale, they have lost none of the villager's enthusiasm. Today, an air horn blast sends Laser class sailboats, gliding towards the first buoy in the race. The triangular course is just shy of two miles and requires not only sailing expertise but stamina, as each captain, without the benefit of a crew, must complete three full races. The committee boat volunteers tally points for each finisher based on their finishing order for each race, e.g. the first place finisher receives one point. The sailor with the fewest points at the end of the race wins The Oyster Cup. In the event of a tie, sailors are ranked by best finishing position.

Today's Oyster Cup trophy is an actual oyster cocktail cup, vintage, from Dan & Louis' Oysterbar. The cup is encased in a beautiful wooden box, built by Charley, and crowned with a bronze sculpture of a sloop, donated by Dave Williams. The back of the trophy has engraved placards for each past winner dating back to 1996. A coveted prize indeed. One that for several years was not won by a person of Oysterville. “Ringers,” invited by Oysterville sailors, seemed to be taking home the cup every year. To maintain interest, Tucker fashioned a new trophy to be awarded to the best scoring Oysterville sailor. He built it with the intention of giving it to the first person who won it three times. As it happened, Tucker, himself, won it three times in a row and decided to retire the lovely trophy to his mantel. The third trophy is a stained glass piece depicting a blue heron in flight. This work of art is presented to the best scoring, experienced skipper who has yet to win the Oyster Cup.

****
Oysterville sparkled as the captains of this year's regatta met at the Skipper's Meeting at noon. Here, the rules of the races are explained, safety personnel and committee boat persons introduced. Tucker then explained the race layout, using orange Whiffle balls as buoys and wooden squares for boats. Terry and Janice, who man the committee boat, explained the air horn signals and scoring. The experienced sailors had few questions and the meeting was wrapped up in short order. 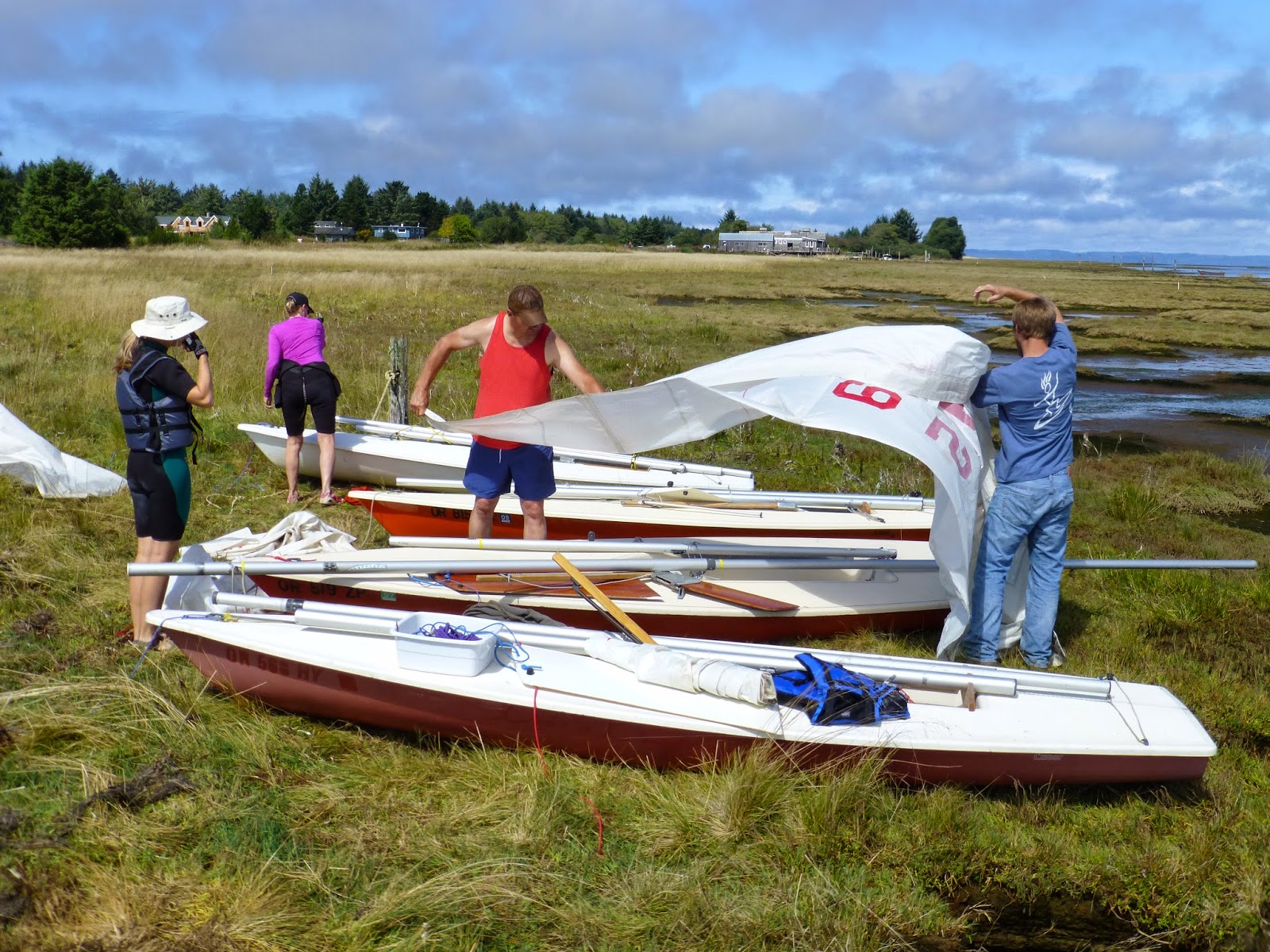 About 2 p.m., the skippers suited up and headed to Shoalwater Bay, hauling down their sails and lines to rig their boats. My girls bounced in delight at the activity and the prospect of spending the rest of the day playing in the bay. About 3 p.m., the spectators began to line up at the end of Clay Street and pick out positions for watching the race. 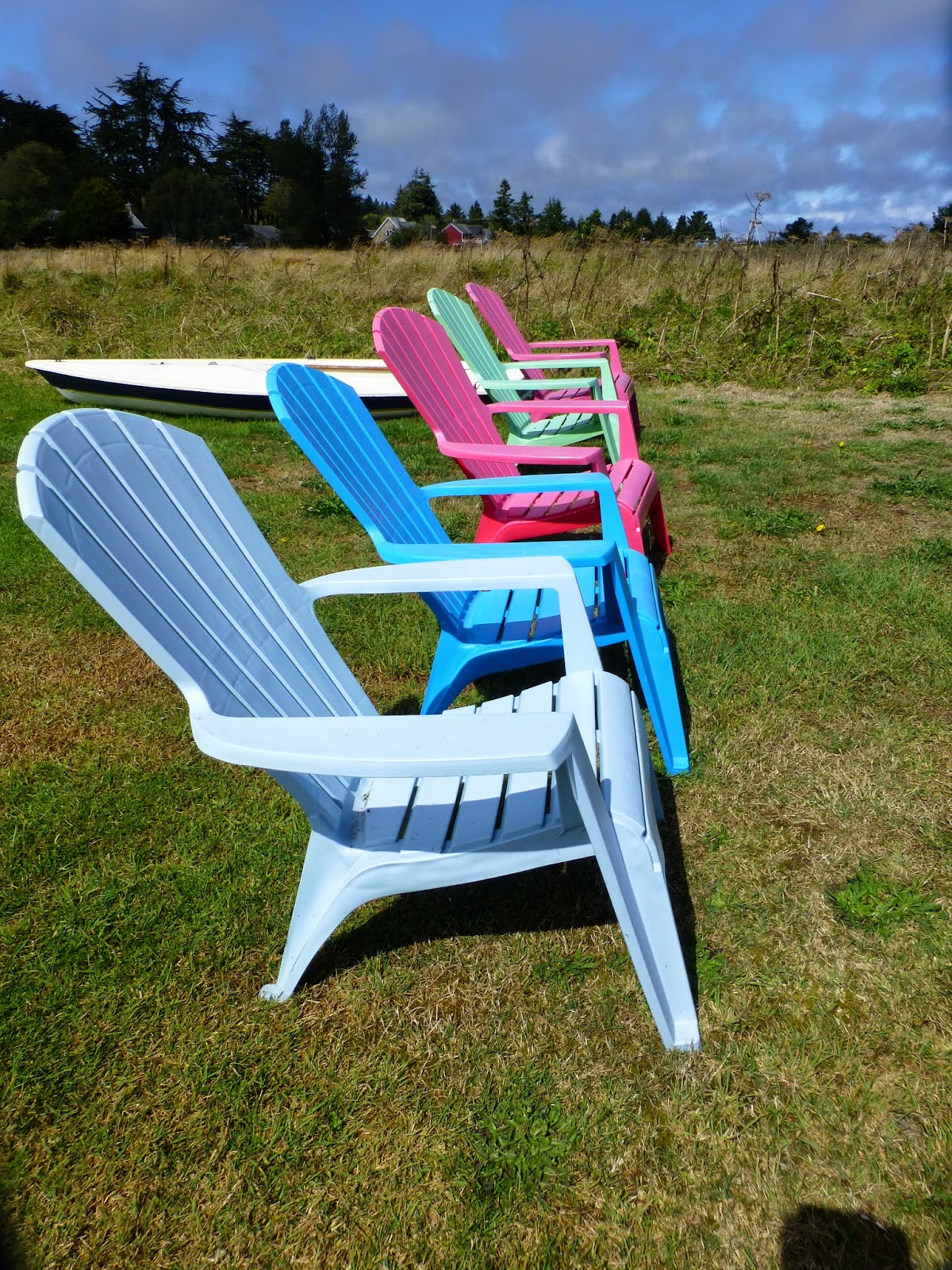 A line of colorful chairs greeted us as we began to set up. Armed with spotting scopes, binoculars, and squinting eyes, the spectators cheered for the racers, and asked/speculated with each other who was who, and who finished where, and otherwise enjoyed the exceptionally nice weather and equally nice company.

We all agreed that the first place finisher of the first race was Clark, Clark again for the second race, and Collin for the third race, with Betsy always nipping at their keels. The rest of the details were sketchy at best.


The races were particularly exciting this year. The sailors were well matched, the boats were in tight groups, changing position frequently adding to the excitement. The South Pacific County Technical Rescue Team towed Alan Dees and his ailing boat in with a wave runner. Alan quickly righted his rigging problem and rejoined the races. Later the scene was repeated as Matt Nixon rode in behind the wave runner. He joined the spectators and regaled us with a first hand account of the three challenging races, as the remaining sailors fought for finishing position on the final race.

After the races the village retired to the Cordray front yard for the Regatta Banquet and awards ceremony. I’m not sure what the Regatta Balls of the 1870's were like, but I'm certain they did not rival the food prepared by Lina and her crew. Lina plans the menus, enlists a crew of family and friends including, Carol, Amber, Sue, and their families to prepare food for a village. I have attended many top dollar, catered events that paled in comparison to the fare presented here.

While the guests dined, Tucker presented regatta tee-shirts of his own design to the third place winner, Betsy Nordquist, then the second place and stained glass trophy winner Collin, and finally a tee-shirt and the Oyster Cup to his son, Clark. Then Tucker presented tee-shirts to each of the race participants and to those who helped out with the banquet.
The sun made her excuses and went to bed, the fire pit glowed with friendly warmth and voices rose and fell in conversation and laughter. The leftover food was stowed away, the stars twinkled their hellos as people drifted through the village to their homes. Guitar chords and voices floated through the night air.

When the new year is young and days are still short, Tucker will look at the tide tables for 2015 and find an afternoon tide in August that is somewhere close to eight feet.  After choosing, he'll design another beautiful invitation and send them out to over fifty families.  I'm already looking forward to pinning it on our refrigerator.  It is certainly a date to save.