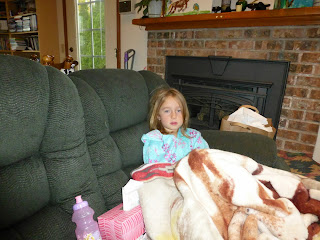 Like the turn of the seasons to an aged farmer, I can feel it in my bones when a sickness is about to descend upon our household. Generally the weather is still nice, but a mom sense tingle tells me something is coming. Then perhaps there’s a friend over who comments, “My throat feels a little scratchy,” or there’s that kid in the park with a runny nose. (I'm not judging, my kids have been that kid before.)  Unbidden, visions of sleepless nights, endless coughing, my house littered with wet tissues, confinement to our home, and money pouring through my fingers, flit through my mind, raising the hair on the back of my neck as my flight reflex urges me to scoop up my kids and head for the hold and batten down the hatch, while the waves of viruses wash over the deck of our family ship.

I hold onto something and breathe to deliver oxygen to the logic centers in my brain. The serenity prayer flows through my mind reminding me to accept the things I cannot change.  If there are children around with outward signs of infection, the virus is most likely already at work inside my little ones, insidiously hiding in their bodies, replicating themselves again and again, waiting for their numbers to grow substantial enough to launch an attack on my child's cells. Then their immune system responds in kind, and their eyes take on that lackluster look, the mucous appears, and the deep harrrooof, harrrooof sound comes from their tiny throats as they try in vain to expel the invader from their body.


I remind myself to take each day as it comes. We have survived these viruses countless times before, and we will persevere once again. I wonder how long this one will last. Maybe it will just be a three day cold. That has happened before—once. More likely it will start in her head, then settle in her chest for a one to two month stay. Coughing fits keeping her up late, and waking her—and everyone else—for hours. Then morning arrives and I rise to send my little red-nosed, dark eyed, zombie off to school. The littlest one tethers me to our house, and my eyes lose focus as I start pacing back and forth, back and forth, back and forth.

And so it has been for the last six weeks in our home.

Two trips to the doctor later we find that Danielle's cold has become bronchitis. Not only does she have fluid in her lungs, but both ears are so stopped up that the doctor thinks she has a hearing loss of forty decibels. This is not news to us as “huh?” has been her response to anything we have said for weeks now. Including doctor visits, tissues, remedies and prescriptions, we easily have three hundred dollars invested in this cold. We have lost countless hours of sleep; one child wakes up to have a coughing fit, which wakes up the other child before falling back to sleep, who has a coughing fit and wakes up the other before falling back to sleep, who has a coughing fit who wakes up the other… And so we go bouncing from child to child, torn by our bodies’ need for sleep and our children's need for comfort.

For. Six. Weeks. And counting… 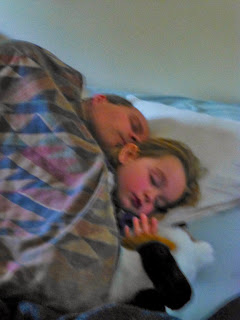 Before having children, I blissfully unaware of the toll it takes on you as a person—beyond seasonal illnesses—everything. But I'm always grateful this hardship is mine, and Charley's too, of course. I know the trials we endure parenting our girls are forging us into better people. Being in a forge is not particularly fun, it's pretty hot, and you get smacked around with big hammers a lot, but I think we'll come out as something new, still composed of the same basic elements, but perhaps wiser, stronger, and more useful. Besides, being quenched in buckets of “Mama, I love you”, hugs that dry tears, and saturated with the magic of childhood innocence feels pretty damn great.

I wouldn't trade my spot in the forge for anything.

Gotta go, I need to run to the store for more orange juice and Kleenex.