The Goofball Girls Go to the Doctor 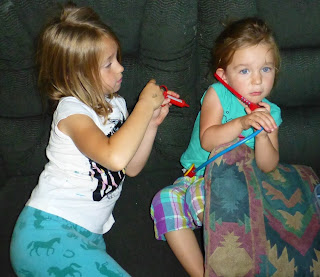 After some rather extensive preparations we load our girls up into our Red Big Truck, as Berzo has dubbed it. As I’m buckling Berzo in her seat I remind her that we are headed to the doctor’s office for a check-up.

I tickle her and tell her that it's just a quick pinch, and pinch her arms. “It’s that fast," I say. Then I tell her to shout, "Give me my shots—I'm not scared!" She shouts it out. I say, "Right here!" patting my arm. She shouts it out and pats her arm. Then I say, "All right! That's my girl!" and we bump knuckles.

We park and unload the girls. Berzo springs out of my arms saying, "I want to see the fishies!"

We head inside and Boots and Berzo make for the fish tank while we get the girls checked in. The receptionist asks us for their insurance cards, which I already have out, and passes us back a clipboard of paperwork.

It's our turn. We gather up our stuff and our monkeys and head back. I smell something funny emanating from Berzo's diaper. Berzo is suddenly fearful and buries her head in my shoulder. We go into our exam room, drop our things, then pop back out to be weighed and measured. Berzo clings to me while she watches Boots, then she hops down and does it too. Having an older sibling is so awesome sometimes. Then we go back into our room. The smell is powerful and I ask the nurse if I can change Berzo in here. She says sure, but wrinkles her nose and reminds me that I can't dispose of the diaper in the room. I ask for a plastic bag. “No problem," the nurse says.

The nurse takes their remaining vitals and the girls are up on the table crinkling the protective paper on the examining table, laughing and squealing. Berzo randomly shouts, "Don't doctor me! Don't doctor me!"

The nurse and I try to talk over them, "What was that? Oh yeah, she still uses her inhaler as needed. Um yes, I wanted to ask the doctor about anxiety. Yes, an-xiety..."

She asks, "Do they seem active?" Before I can respond, she looks at them and says, "I'm going to mark that one 'yes'."

Then Boots spies her Nook, and as usual, Berzo follows her lead. The room is cavern quiet. We discuss the remainder of the concerns and she notes them in her laptop for the doctor. She tries to ask Boots some questions and Boots ignores her. I tell her to respond to the nurse and put her Nook to sleep. She responds with the least amount of words possible and turns her Nook back on.

She gives the girls gowns and tells us the doctor will be here soon. Boots gets her gown on, but Berzo wants nothing to do with getting undressed. Boots dances around a bit with her My Little Pony underpants peeking out, and suddenly it's OK. So we pull off Berzo's shirt and pants. Berzo is into it now, she’s running in circles shouting, "Naked baby on the loo-oose!" Then rips off her diaper.

Charley is trying his best, but the noise, doctor office cooties and girls in constant motion is getting to him. Sensing his distress, I ask him if he would rather go to in the waiting room. He takes a breath, declines, and rallies himself. Berzo is climbing up on the bench near the counter and jumping off. Boots sets her Nook aside and jumps down from the table. Then they start dancing around in a circle holding hands.

The Doctor Is In

Berzo is scared at first but warms up as she notices that Boots is not scared. I ask him if I could talk to him a moment after the exam. He says he can't today and that he'd call instead. He says that most check-ups today have asked the same and he's short on time. He is friendly as always, but seemed a bit harried. I say that'd be fine and gave a very short version of her issues with anxiety. He dashes out to get a handout and says he'll call in a referral to have her anxiety evaluated. He said that anxiety is common, and detecting and treating so young can almost ensure it's all but gone by adulthood.

The doctor starts the exam. Boots ramps up her fidgeting on the exam table, relishing in the noise made by the protective paper. He listens to her heart and lungs. Berzo puffs out her chest for her turn. He hands both girls a tongue depressor to play with while he checks out their ears.  Then he asks Boots a question. She has the tongue depressor in her mouth and is talking around it.

I signal to Boots to pull it out of her mouth to answer; she gives me a smirk and continues talking around it. He moves on to Berzo and makes a Donald Duck noise as he looks in her ears. She laughs. He does it again and she cracks up.

After he examines both girls, he asks Boots to hop down from the table. She does. He asks her if she's excited for first grade. She rounds on him, gets very close, and says, "I DO NOT LIKE SCHOOL!"

He looks around her at me with raised eyebrows and laughs. He asks her to turn around and touch her toes to check for scoliosis. She turns around, squats down and grabs her feet. He laughs again. He says, "Um OK, can you straighten your legs?" She straightens her legs in a splits maneuver. It looks like a goofy version of downward facing dog. He laughs again and puts his hands in the air.

I hop up and demonstrate bending and touching toes. She gives me an embarrassed smile and does it. He checks her hips and tells her to stand up.

He moves on to Berzo now and I'm showing him her molluscums and we're discussing treatment. Meanwhile Boots is spinning around in circles, then—CLUNK! She's down. "Are you OK sweetie?” says the doctor.

I sigh. I hug her and then sit back down and the doctor looks at us and asks, "Do you two take your vitamins?" I look at Charley and he looks at me. I say I do. Charley says he doesn't. Then the doctor says with a smile, "You need to take care of yourselves. These are some active girls."

Our time is nearing an end and I eek in that we're concerned about Berzo's pica.

"Sand, chalk, dirt, crayons, Play-Doh, salt... If she gets a hold of any of these things, she runs and hides to eat them," I say. "She seems to have a compulsion for it." I told him I was asked my brother-in-law, who's a veterinarian, if we could install a mineral lick in the back yard. She'd be there all the time.

The doctor felt that it was classic low iron and in lieu of another attempt at a blood draw, he'd put her on extra iron and wait and see if it abates.

The doctor announces that neither girl is due for any vaccinations today, so that's it for today.

He tells us good-bye and we thank him.

Charley looks at me and says, "I think we made his day."

I thought about it and he did seem much more lighthearted when he left. Well that's something. Relieved that our trial was at an end, we gave our girls a big hug and headed home.

Having a six year old and two year old means I've been to at least nineteen different check-ups and countless sick visits. During that time I've amassed a list of a few tips that have served me well during these trips. Please feel free to add more tips in the comments section.

Both of my girls became scared of going to the doctor around the nine month mark. Around their first birthday I started doing these things which worked wonders.