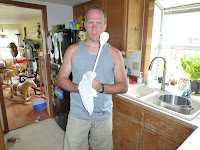 The equipment is washed and ready. The ingredients, laid out. The recipe, displayed prominently. Kids, out from underfoot. Let's brew!
Cooking 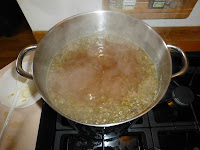 Charley pulled out and washed his new cookware, while talking me through the process using words like wort, fermentor, Fuggle and Goldings, as though he'd been born to them. Tenderly he packed the grains into gauzy bags and placed them in the cold water bringing them to 180 degrees. At the appointed time and temperature he removed the grains brought it to a rolling boil and added the malt extract. He watched, monitored the temperature, timed, and stirred. He added hops once, twice, five times before the final buzzer rang, signaling the completion of his first cook. 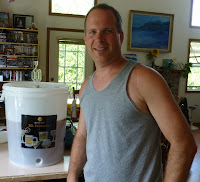 Fermenting & Fretting
He then poured the mixture into the fermentor and waited for the thermometer, that was taped to the side of the bucket, to indicate when the wort was to cool enough to add the brewer's yeast. Like an expectant father, he paced, shifted foot to foot, randomly feeling the sides to see if it felt cooler to the touch. Yet the thermometer remained black. An hour or so passed in this way before he began to fret that the thermometer was defective. He took our forehead thermometer, set it to object, and gave it a go.  It read 95 degrees. Too anxious to wait, he filled up our bath tub with cold water and gently, tenderly, set his sealed fermentor in it, the water level just below the thermometer. In about an hour it was cool.  Triumphant, Charley then added the brewer's yeast and plugged in the airlock.

For a week, the airlock bubbled away, as the yeast metabolized the sugar leaving alcohol and CO2 behind. Then the bubbling action in the airlock slowed sufficiently to indicate that the yeast was done performing its magic.

Aging
This step involved siphoning the beer-to-be from the fermentor to the carboy, then sealing it off with another airlock. Another week. 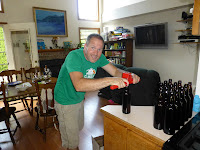 Bottling
To create carbonation, the remaining yeast microbes are fed corn sugar. Once blended, the beer is siphoned off into freshly sanitized bottles and capped.  It would be one week more before the first bottle would be ready for sampling. 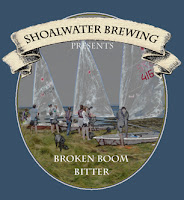 Labeling
Broken Boom Bitter of Shoalwater Brewing is a fine name that is worthy of a fine label. Charley found a photo from last year's regatta that has many of his favorite people, complete with sailboats being rigged on the bay. As an added bonus, Lina's dog Buck, who recently passed away, is supervising the work curled up in a sunny spot in the grass.

Charley played with the picture in Photoshop and settled on a colored pencil filter. He left it up on the computer for me to look at, as he left to put Danielle to bed. From there, I added a circle frame and three borders, a banner graphic and text for Shoalwater Brewing and the text for the Broken Boom Bitter name at the bottom. Then again from Main Brew he acquired some label paper.  I headed off to Kinko's to have it laser printed, lest our inkjet leave his drinkers with colored hands and a smeared label. After carefully placing the paper in the tray, such that it would print on the paper side instead of the glue, I went ahead and printed on the glue side. Luckily, I had only used half the paper.  I flipped the next batch and managed to get it on the correct side.  Charley seized his first free moment to apply them to the bottles. 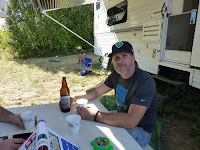 Cheers!
This Monday was officially one week and one day since adding the corn sugar. It was time. We were having dinner with our good friends, Mike and Stephanie.  He pulled the bottle out with a shy smile and set it on the table. A few moments later, he popped the top and it gave the slightest hiss, much to Charley's relief. He poured it into equal thirds in Dixie cups, careful to leave the last inch or so in the bottle. (Sediment.) We clinked our cups—cheers! each taking a tentative sip then a hearty draught. It was pleasantly carbonated, full of flavor, not the least bit bitter—it was lovely. Even the non-beer drinker, Stephanie, requested a taste. She affirmed that it indeed tasted like beer. Then placed a request for a bottle for her brother.
Everybody needs a thing. Something that stretches us, excites us, and interests us. Something that we are good at, simply because it feels like play. For some it's music, or sketching, sailing, or collecting pinball machines, for me it's writing. I'm glad that Charley has found a thing too.
Posted by Amy at 10:31 PM