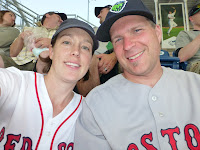 It is Charley’s birthday and the kids are home with Oma and Opa, as we find our seats along the third base line, a few rows up. The view is excellent, as it is with almost all the seating—one of the many benefits of a small ball park. The stadium smells pleasantly of new car.  The incredibly young looking ball players warm up. We rise for the national anthem, then we lower to our seats and raise up our beers. Go Hops! We are dressed in our Boston shirts and capped with Hillsboro Hops hats. A combination we see repeated in many of the other newly minted Hillsboro Hops fans. Play Ball! The Hops are playing the Spokane Indians tonight, and our pitcher burns in a 91 mph fastball. We cheer for the ump's signal for strike one. Single A though the league may be, we are spending a warm summer evening drinking a Bridgeport Long Ball Ale, eating a salt encrusted pretzel, cheering on our boys as they play with everything they've got. It is good.

When I heard about the city breaking ground on my softball fields to put in a baseball stadium, I felt excitement mixed with disbelief.  The city is pleading poverty as our schools are running understaffed with five "budget cut days" sprinkled throughout the school year and more to come this next year. I know there are budgeting sandboxes, but would it not seem funny if my house was in all manner of disrepair and Charley and I bought a brand new Touareg? However, later I learned that the city issued bonds to cover the 15.5 million in construction costs, which they hope to repay with revenue earned from leasing the park to the team and sales. If that doesn't happen, out of the general fund it comes...

Anyway, since there was nothing I was going to do to stop it, and because I secretly really wanted that Touareg, I followed the development of the team and field with great interest. As a brew enthusiast, I was pleased with the name, Hillsboro Hops, a nod to the agricultural roots of our community and to our prowess at growing—and brewing—hops. As for our schools, perhaps once the stadium is paid for, a generous portion of the profits could be earmarked for shoring up our crumbling school system. Imagine the community goodwill that would create! It would be my favorite fundraiser. I'd better have a second hot dog—for the kids. (By hot dog, I mean beer.) 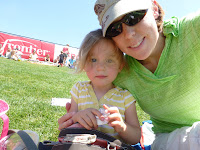 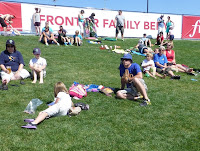 We took the girls with us to the first game in general admission seating for seven dollars a ticket. The view was a bit far off, but being assigned to the grassy berm meant they could range a bit without stepping on someone's toes. That came in handy during the 17 trips to the restroom. (We have an enthusiastic potty trainer and the lemonade came in a milk jug with a straw.)

We lasted about seven innings before Charley and I called the game due to excessive toddler chasing and showers of whine. All in all, it was a fun afternoon and a pretty good first attempt.  It may take a half dozen lemonades and hot dogs but we'll make baseball fans of them yet.  Meanwhile Charley and I can reclaim one of the many interests we've benched since having kids.

A cool breeze and bases loaded brings up goosebumps as the sun sets on the bottom of the ninth and Charley’s birthday. The Hops are down by two and there is one out. We chant “Yo-gey! Yo-gey!” as he goes down swinging. Roberts is up to bat. He is due. He thinks so too and strikes out swinging with everything he had at a ball that was in the dirt. Hops lose. Buy hey, that’s baseball. What a game. Happy Birthday Charley. 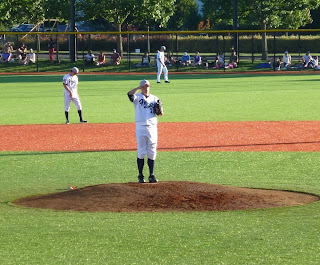 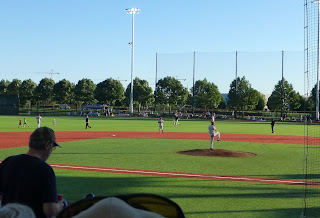