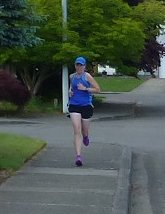 I’m on the first part of my favorite run through the park.  There’s a bit of a hill and my legs start feeling sluggish. I crest the hill but still my legs feel a bit floppy and my breath irregular. I want to stop. I see the hedge row ahead and know my second wind is on its way. My watch buzzes the one mile point. I pass the hedge row and suddenly I’m not running anymore. I’m floating along like I could do this for days. Everything is in sync, my breathing is regular and easy, my legs are light and my feet are rhythmically pounding. I love this part. I let my mind fly with the music and watch the trees and birds as they move in time.

My second wind has arrived.

I have been running sporadically ever since I graduated high school. I've never been a distance runner; preferring the sprints of a stolen base or a fast break rather than the drone of pounding feet and scorching lungs. However, since I've left my school sponsored sports days behind me, running has long been the most convenient and economical way to stay fit. There was just one problem: I hated running distances. I believed I wasn't built for it, with my gangly long legs and obstinate lungs. Deciding to do it anyway, I'd start with a short half-mile run a few times a week. A couple weeks later, I’d push it to a mile or so. Then I’d either get discouraged by my lack of progress, or sick, and all my momentum would slide right down the drain like dirty bathwater. Then I’d start all over again. And again. This went on for the better part of a decade.

Then Charley and I started rock climbing. From the first time I rang that bell thirty feet up, I was hooked. However, when clinging to tiny hand and foot holds on a vertical rock-face the extra fifteen pounds I was toting around felt more like fifty. Through my desire to improve, I decided to start running again. Throwing out the half mile runs, I found a two-and-a-half mile route and went for it. I walked when my lungs burned, then as soon as they cooled, I was off again. It didn't take long before I could slow-jog the whole route. After my body adjusted to the routine, imagine my surprise when the first second-wind arrived!

What was that? I feel great! Hey, I think I just got a second wind.

It occurred to me that all those years I thought I couldn't run distances, I was quitting before my body had a chance to get started. The first time I tried a four mile run, I was stunned to find that not only do I get a second wind, that I also got a third and a fourth! At the end I still had something left for a strong finish.

How many times in my life have I quit because that nagging voice sang out, “You can’t doooo it. You’re not gooood enough.” There have times where I have persevered, usually because I had no choice, but there have been many more times where I believed that voice and either never tried or quit before I got going. 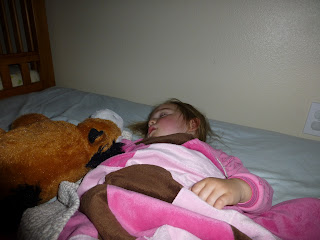 Berzo wakes up fussing. Since my cognitive function—isn't, my instincts take over as I crawl around on my bed seeking Berzo's familiar heat signature and smell. I find her, pull her close and wait for her to return to slumber land.


She starts talking, “I make a big poop. I poop in my diaper. I load-ded my diaper.”

I peel my eyes open and glance at the window. Judging from the corona around the black-out blanket it’s light outside, but my circadian rhythm is pulling me back into sweet, blessed sleep. I fight the pull and decide to consult my watch: 5:02 a.m.

Although the official sunrise isn't until 5:49 a.m. my little sundial senses the light outside and is sure she should be casting a shadow somewhere. She continues talking about pooping. My foggy mind alerts me to sniff the air; no poo smell. I silently thank God I don’t have to get up and change her diaper right now.

She must be referring to last night's debacle. After 45 minutes of reading books, singing and lying in a dark room, she pooped. I was less than thrilled that my not-sleeping-toddler now needed to be changed. After another half hour and a change of guard, she’s asleep. Her little mind must have been churning on it all night.

I’m not making this stuff up.

My sleep drunk mind formed the words, “Ssssh, baby, sleep time.” I put my hand on her lips. She pulled my hand away and continued talking. I started to despair and rolled over plugging my ears. Randomly slurring, “Go to sleep, Berzo.” At one point I toss my Nook to her, hoping she’ll play some of the apps, but then remember they’re all dysfunctional because of the last OS update.

At about 6 a.m. she leaves the room saying, “I go say hi to Papa.  I’m going.” She closes the door. Papa is already at work; images of all the various ways in which she could hurt herself or choke start flashing in my sleep/wake dreams. Then I can hear her talking to Boots, “Good morning, sis-ster.”

A few moments later I hear Boots say, “Berzo, GO TO BED!  Berzo get out of here and go to bed!” Berzo had climbed up on Boots' bed, slung her leg over Boots' peacefully sleeping form and bounced on her like she was riding a horse. I hear Berzo squeal and laugh. A laugh-snort escapes me and I hug my pillow and nuzzle in.

Soon after both girls came in for a snuggle. We laid in bed until Berzo started squealing every time Boots touched me and I decide to call it a day—or would it be night?