I find it fascinating that from the moment of conception until about age five, human development seems to parallel our evolution.  We start out as a single fertilized cell floating in water much like the first life on earth. Then much like the first complex life, a backbone appears, then fish-like gills, an amphibious-like tail and lungs, and then things start looking a bit more mammalian. Around a year or so our adorable babies begin walking with the bowed legs and the distinctive gait of a chimpanzee. My girls always completed the look by making chimp grunts and hoots as they toddled around. I called both my girls Little Monkey at this stage. This charming period ends abruptly at 18 months. This is when we reach the Cave Kid phase of our human development. That amazing prefrontal cortex has begun to grow making them smarter and more self-aware, but they have an almost total lack of impulse control and their immature brains are constantly overwhelmed with stimulation.

And so I bid farewell to adorable Monkey Berzo and say hello to Cave Berzo. Mine! Snatch you it! Again! Eat! Pooping! Eat! Plllllay! Hunt kitty! Right now! Give it to Berzo! I WANT it! Go AWAY Mama! My Moe!

I find myself running around after her saying, “You may not hit your sister on the head, hitting hurts!” and “No pulling your sister’s hair! If you want to touch Boots, touch her soft, like this.” I demonstrate a soft pet, but she grabs a handful of her hair and pulls, laughing as Boots shrieks indignantly at her hurt head and feelings.  “Let go of the kitty’s tail, it hurts her and she might scratch you!” and "You may not touch the kitty's bottom, that's a yucky place.  Let's go wash."  Berzo laughs.  I say, “Spit that rock out, yucki!” and “We color with crayons on paper.  Crayons are not for eating.  If you're hungry, I'll get you a snack.” I hand her some food which she often outright rejects and goes to hide so she can continue eating the crayon.

Like a cave person, she loves to forage for her food. A petrified raisin or stale Cheerio found under the sofa is far more delectable than anything I put on her tray at mealtime. If it’s a berry growing on a bush she’ll have it in her mouth before I can catch her. She also enjoys sampling: all forms of rocks, dirt, chalk, sticks, crayons, Play-doh; basically anything small enough to fit in there or close enough to lick. If it was stuck to the bottom of her foot, all the better!  She relieves her discomfort and gets a snack at the same time! At meal time, she pitches a good portion of her food off her tray. Then when I pop her out of her chair, she’ll often pick it up off the floor and eat it. “Cave Berzo doesn't want to be fed; Cave Berzo wants to forage.”

If you happen to be sitting or lying on the floor in our house watch out, Cave Berzo will come out of nowhere, jump and land her bottom right on your unsuspecting belly/back or whatever part she can access. Also, she loves head-butting. Everything. Last weekend at the Evergreen Aviation Museum she spotted some Plexiglass separating the walkway from the exhibit space. She squirmed out of my grasp, dropped her arms to her sides, bent over, got a trot going and head butted the Plexi. She bounced back a few steps and then grabbed my hand and looked up at me with those big blue eyes and smiled. Onlookers gave me a perplexed look.  All I could do is shrug, “She’s in her Cave Girl phase.”


Boots doesn't get it. As an almost six-year-old she has left her Cave Girl phase behind and is moving towards joining her fellow Homo sapiens. She has no understanding of what is going on with Berzo. When I tell her she did the same sort of stuff, she looks at me like, "No way mom, Berzo is just weird." Indeed my dear, we all were. 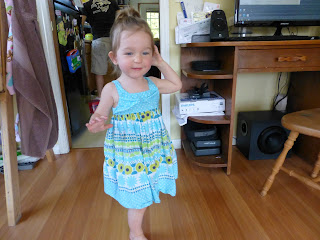