Once upon a time an 18 year-old-girl, restless to try her out her downy wings, flew from her father’s home and landed in a shiny new apartment. The square footage numbered 725 and never before have 725 square feet sparkled as they did under my careful eye. My roommates and good friends, Trisha and Sarah were also a naturally neat people. Keeping our pretty little apartment clean and tidy was practically effortless, and in a way, fun. It was like playing as compared to my share of the work of cleaning my dad’s much larger and older home.

Later, my husband-to-be, Charley moved in with me. I found that living with a man was a lot more work. The feeling of playing house quickly turned to drudgery as I strived to maintain the sparkle. Luckily, Charley, being the thoughtful man he is, jumped right in at my first sign of distress and started pitching in with the dirty work.  Grateful for the help, I agreed (with myself) to let the sparkle fade a little, thus striking a balance that returned peace to the land.

Nearly a decade later, we were living in a house and added baby to our family. Then another. At first I battled the grime but soon took the sage advice of more experienced mothers and gave myself permission to let things slide a little further. In reality I was too tired and preoccupied to care about sparkle. Then as Boots grew, I started noticing all that I had let slide, and the anxiety began to build. I did my best to get back the sparkle, but alas it was lost. Any sparkle I could uncover was quickly hidden beneath, toys, splashes of juice and chocolate milk, hand-prints, cat vomit, and our normal dirt. Tired, frustrated and sick of saying, “I’ve cleaned this up three times today!!”  I once again sorted my priorities and found that familial happiness ranked much higher than sparkle. Why clean the same thing several times each day only to get upset at my little one for being little? It made about as much sense as standing in ankle deep water while drying my shoes by lifting up one foot at a time.  Then shouting in frustration, "I already dried that shoe twice today!"

Rolling back my standards allowed me to focus on enjoying sharing time with Boots. However, I was still spending any and all of my off duty time doing household chores and errands. I was taking almost no time to do anything I found relaxing or gratifying. In all honesty, I didn’t feel like I should. I felt guilty every time I took a walk by myself or laid down to rest. Then during a burnout meltdown Charley, the astute observer that he is, pointed out that perhaps I should take a break—everyday. It took some convincing but as I thought about it I realized that  professionals get a lunch break not only to eat, but to unwind.  Then they come back refreshed and capable of maintaining their optimal productivity.  Whereas, I expected myself to go, go, go until Boots was asleep in her bed at night (she stopped napping at barely two).  I felt like a failure every time I fell short. Ridiculous. So instead of spending the afternoon after Charley gets home from work or Opa Day doing housework or running errands I go... out! And it’s wonderful! During this hour and a half  before dinner, I sometimes walk around our park and take pictures, or take a run, or walk to Starbucks and write, or walk to New Seasons and write, or to the library to write, you get the idea.  Sometimes I regress and do something productive but in general I'm pretty good about using this time to recharge.

Since then we have added another baby to the mix, and with two kids aged five and under, the mess now reaches new heights.  (Depths?) Of course, I’m teaching both girls to pick up after themselves and contribute to the household, but at this point I invest more energy into the training process than their help saves me. Although I expect dividends on my investment... someday.

All that housework that I’ve let slide for the last six years has landed—everywhere. The grime and dust is lurking in every unwashed window sill, nook and cranny, in every kitchen drawer or cabinet door. And there are toys and art supplies everywhere. Yesterday, Boot's friend jumped as a rogue dust-bunny floated across the floor. “Oh my gosh, I thought that was a mouse!” Yes, we have dust-bunnies substantial enough to go rogue and scare unsuspecting guests in our home. I’m pretty sure I heard it chuckle.

Charley and I keep up on the daily chores, we pick-up and sweep at least once a day (I have yet to locate the dust bunny’s secret lair), the dishes are done several times a day, as well as the garbage and recycling, the clothes machines barely get a breather and the bathroom gets scrubbed at least once a week. Our efforts keep us from fully descending into entropy; but I can see it from here, a swirling array of liberated electrons and other particles bouncing around in the vacuum of space. But I’m OK with that. Someday we’ll have more time and energy (or money to hire a cleaner) and we’ll get things back in order, but that time is not today. I have more important concerns, spending time playing with my girls, visiting with my husband, and taking care of myself so I’m able to take care of my family. My house might be messy but my relationships are neat, tidy and sparkling with love. 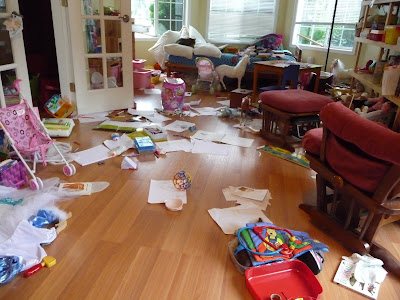 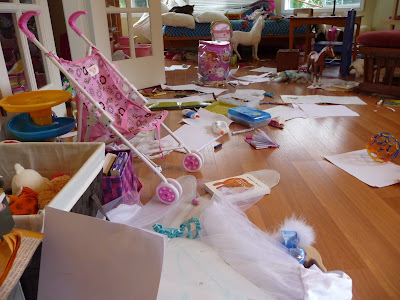 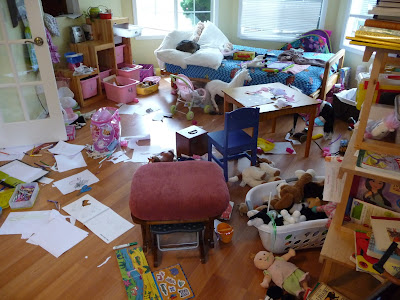