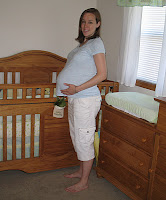 Being pregnant was a fascinating (and sometimes downright scary) experience.  It seemed to go on for an eternity, then just days after the delivery I could hardly remember what it was like being that big, carrying a little life I loved so passionately, but had yet even to touch or see.  So I'm here to tell the tale before pregnancy amnesia claims the rest of the details and replaces them with such critical information as the names and whereabouts of my kids' stuffed animals, the location and state of their clothes, toys and the words to their favorite picture books.

For the next week or so I'll be posting new articles regarding some of the different aspects of pregnancy, including: Discovery, Trimesters by Girth, There's a Baby in There!, Worry!, Other People, and Hi Baby!

In each of my three pregnancies my reaction to the + on the pregnancy test was surprising.  The + sign themselves were overly long in coming and I was pretty sure how I would react when it was positive.  I had images of winning-the-lottery style jumping hugs and smiles—like the commercials.  Not so...

After my first + sign appeared, the am-I-really-ready-for-this anxiety washed over me like a cold Oregon Coast wave, but I escaped the undertow and danced in the sands of excitement and joy.  That pregnancy ended in heartbreak ten weeks later when I miscarried.

Three months later we started trying again and after many additional months went by the + sign reappeared.  There was none of the former anxiety, only joy tempered with a little worry about a repeat.  That pregnancy happily concluded with the birth of our first daughter, Danielle.

The third + sign didn't make an appearance until almost a year of trying.  When I saw it, I had to sit down as my heart pounded and my vision blurred.  My brain rapid fired words such as miscarriage, down syndrome, labor, stretch marks, sleep deprivation (ohGodIdon'tknowifIcandoitagain), engorgement, mastitis, cracked nipples, cleft palate, autism, spina bifida, sore hips, morning sickness, colic, premature birth, teething, nipple biting, shots, etc.  It was as if these words were bullets fired by a guerrilla soldier that was hiding behind the dunes of the sunny beach I was walking on while dreaming of breathing in baby smells again.  Whew!!

Stunned but not felled my by the initial attack, I persevered by taking each moment as it came. Although I'm in the thick of the dreaded sleep deprivation phase, I'm still very happy to be the mom of another adorable baby girl.

What was your reaction to the news that you were going to be a mom or dad?